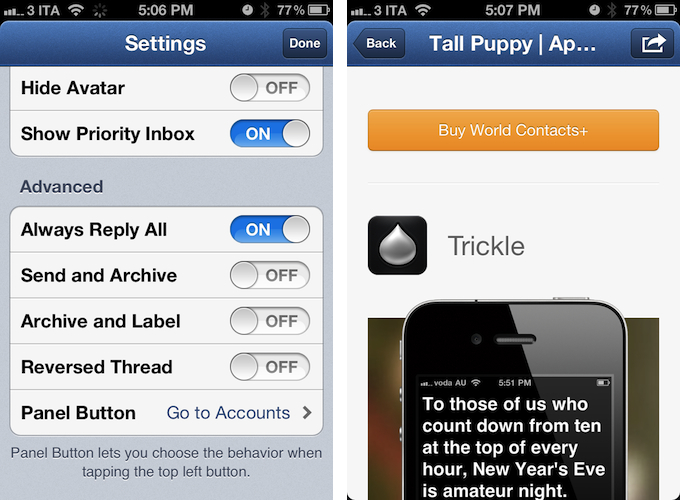 Sparrow for iPhone, the alternative email client for iPhone I reviewed three weeks ago, has an update on the App Store today, adding a number of functionalities that didn’t make it into version 1.0 of the software. Sparrow 1.1 allows you to show or hide the dock badge per account, open links through a built-in web browser (which includes options to open in Safari, and mail a link), and selectively choose which folders or labels to show in the app. There are new actions to empty trash or spam, and you can now activate a Send & Archive option in the Settings to instantly archive a message or conversation as you send a new email.

About push, which had to be removed from the final version of Sparrow 1.0 – the developers tested push notifications while the app was in beta, and they worked well, but Apple didn’t approve the implementation – the developers are confident Apple will revise its position. They will submit version 1.2 of the app soon, re-including support for push notifications. And if Apple won’t approve Sparrow with push for the second time, the developers say they are working out a solution to include push in other ways “with or without Apple”. It will be interesting to see whether Sparrow will consider adding push notifications through external services such as Boxcar, which recently raised new funding to build a push notification service for mobile developers. Update: the beta version of Sparrow I tested included push through a method that let the app run in the background leveraging the VoIP API. It’s not clear whether Apple will ever revise its position on letting a non-VoIP app use the VoIP API.

Thanks to your amazing support, we feel confident that Apple might revise its position on the Push API. We’ll submit a first version of Sparrow 1.2 including it. This might delay Sparrow 1.2 validation but we’re already working with some partners to include Push in future versions of Sparrow without needing Apple clearance.

Sparrow 1.2 for iPhone will also include landscape support, 9 more languages, and a gesture to swipe up or down between messages. The team is also working on Sparrow 1.6 for Mac, which will bring fixes and POP support.

Sparrow is a fantastic email client for iPhone, as I’ve already detailed in my review, and this 1.1 release adds some nice features that didn’t make the cut in the original 1.0. You can find Sparrow 1.1 on the App Store today.