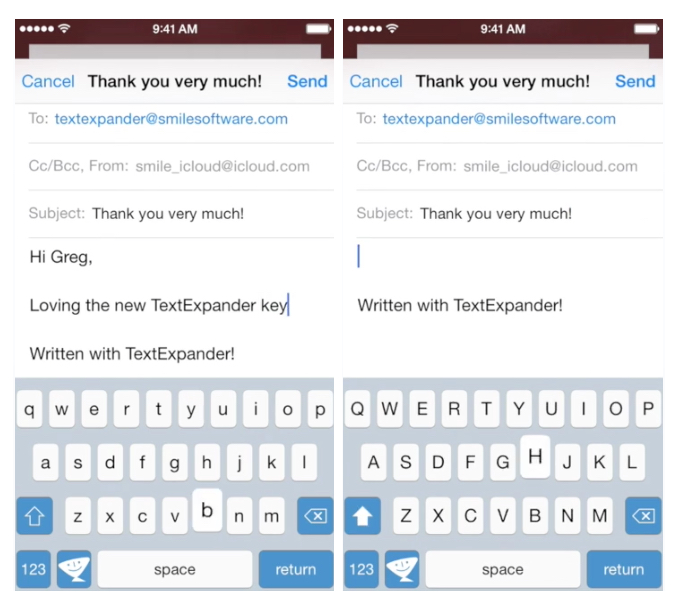 Smile, makers of popular snippet expansion utility TextExpander and PDF editing tool PDFpen, have announced today that TextExpander touch, the company’s mobile version of the app for iPhone and iPad, will feature a custom keyboard on iOS 8, allowing users to expand snippets in any app.

One of the big announcements from Apple’s WWDC 2014, custom keyboard extensions will enable third-party apps to provide keyboards to install and use at a system-wide level; keyboards will be entirely managed in iOS’ Settings, and they will offer privacy controls for keystrokes and other sensible information transmitted over the Internet.

In Smile’s announcement today, the company showed a preview of a custom TextExpander keyboard with separate lowercase/uppercase keys and the ability to expand pre-configured snippets in any app – in the demo, snippets are expanded in Apple Mail. Previously, Smile had to rely on a third-party SDK to enable developers to manually add support for TextExpander touch in their apps; with iOS 8 and the app’s custom keyboard, any app will be able to switch to the TextExpander keyboard.

Smile also announced a public beta program for TextExpander touch 3, launching this week ahead of the app’s update for iOS 8. Users interested in the beta can check out the details on Smile’s blog post.

Shortly after WWDC in June, various companies confirmed that they were working on custom keyboards for iOS 8. For more on Apple’s upcoming iOS update and extensions, read our in-depth story from June.