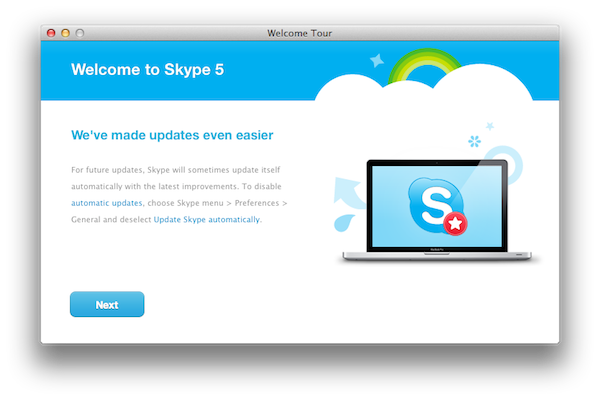 Earlier today, Skype updated its Mac client with a series of new features, bringing the app to version 5.6 up from the 5.5 beta released in January. Among the most notable improvements, full-screen support for OS X Lion will allow Skype users to eliminate distractions and focus on the chat or call at hand by putting the app in a dedicated workspace on 10.7. Speaking of calls, group video calling received a fresh coat of paint with an improved user interface design that now allows for easy switching between dynamic and non-dynamic modes – when dynamic mode is on, the person who is speaking is moved automatically to the top of the window, similarly to how Hangouts work on Google+.

Whilst still featuring the much criticized window design that was introduced with version 5.0 last year, Skype is making some subtle improvements to the app. For instance, messages can be removed from conversations now, and entire conversations can be deleted from the sidebar (and the history). The first-run experience has also been redesigned, now including a handy tutorial to show what’s new in the latest version of Skype, and guide users though some basic steps such as making a call. Equally important it’s the new Automatic Updates function, which will make sure Skype is running the latest version available and will relaunch the app every once in a while if an update has been detected and downloaded in the background. This option can be disabled in the Preferences.

Skype 5.6 is a recommended update for all Skype for Mac users (it also contains bug fixes), and it can be downloaded here.