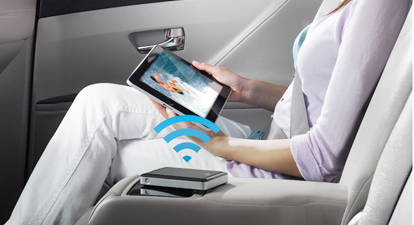 With all the recent talks about MobileMe and the cloud, it’s easy to forget most users still don’t have access to fast and reliable Internet connections that would allow them to stream their entire music library, movies and photos off the web. Whilst streaming is undoubtedly the future of media consumption (just look at the Apple TV, Google Music Beta, Netflix, or Spotify), managing media locally still plays an important role, especially for iPhone and iPad owners who are forced to keep everything organized into iTunes, and sync. Seagate wants to become the new middle man in this scenario, and with the official announcement of the GoFlex Satellite this morning, it looks like they have a chance to provide a better solution for many users.

The GoFlex Satellite is an external portable 500 GB drive that’s got a wireless connection and can stream content up to 3 connected devices at once. It’s got a built-in battery with 25 hours of promised life, and can stream 5 hours of continuous movie content. It works with iPhones and iPads through the GoFlex Media app, but Seagate says it’ll also be compatible with other WiFi-enabled devices and it will be accessible on a local network from a web browser. The portable drive, offering way more storage than an high-end iPhone or iPad, is clearly meant to carry all your music and HD movies around, bridging the gap between local storage and streaming. So while you’ll have to carry yet another gadget in your bag, at least no cable will be required to beam content to iOS. Most of all, music and movies won’t need to br synced locally to an iPhone or iPad; on the other hand, media can be transferred from your Mac or PC to the GoFlex Satellite with a USB 3.0 (USB 2.0 compatible) cable and the Media Sync desktop software.

With the growth of the tablet and iPad markets and the larger volumes of high-quality media now being consumed, there is a clear need for access to content that is not plagued with the challenges of streamed video over the Internet,” said Patrick Connolly, vice president and general manager of Seagate’s retail group. “The unfortunate fact is that these popular new mobile devices are hampered by their limited storage capacity while one of their primary functions is that of media consumption.

“With the GoFlex Satellite mobile wireless storage, we wished to create an elegant solution that provides real value to the multitude of iPad users out there by delivering a seamless connection to local storage. No longer will a consumer feel as though it is a compromise to purchase a lower capacity tablet or iPad. With GoFlex Satellite, people will be able to carry their entire media library with them without the need for wires or the web at a fraction of the cost of adding 3G or purchasing or a higher capacity tablet.

In spite of non-exceptional battery life (5 hours of video doesn’t sound exactly great, considering I like to watch my Lost episodes one after the other), I think this is a great idea, and I’m definitely looking forward to the product. The GoFlex Satellite ships this summer, and it’s available for pre-order now at $199.99 from Seagate.com, Amazon and BestBuy.com.