Browser Wars - it’s not surprising that competition for the best browser is always fueled by which is the fastest, most reliable and doesn’t suck up all your resources on your desktop and mobile machines.

According to Net Applications newest report, July was a great month for Apple’s Safari browser. July boasted the largest increase ever, with Safari being used by 8.1 percent of all web users.

Apple’s iOS devices (iPad, iPhone and iPod Touch) make up for more that a third of the usage for Safari. The growth rate surpassed (and doubled) Chrome as well, jumping .6 percent for July while Google’s Chrome only grew .3 percent. 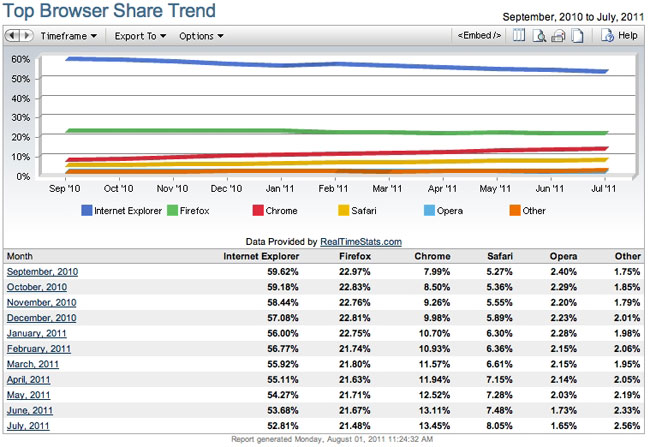 Statistics say that Safari has had continual growth for 17 months now while Microsoft’s own Internet Explorer has been declining. IE still has 52.8% of the market but solid declines month to month help Apple and others cut in to Microsoft’s dominance in the browser market. IE 9 is being used more with Windows 7 adopters but the overall browser share for IE is still declining.

If Apple and Chrome are growing and IE is shrinking, where is Firefox and Opera in all of this? Numbers show that Opera is down to a minimal 1.7% of the web market - this is where it was back in 2007. Firefox is mostly steady but had a slight decline from 23% a year ago to 21.5% now.

Safari isn’t King of the Jungle yet but is making great strides. Apple’s strength in mobile devices and increases in Mac sales will help Safari continue to grow and grow. Safari had a major update 2 weeks ago with version 5.1 that supports full screen mode and gestures (Mac), Reading List and more. The upcoming iOS 5 adds some great new features for Apple’s mobile version like tabbed browsing, Reader and Reading List as well as an improved performance on all iOS devices.