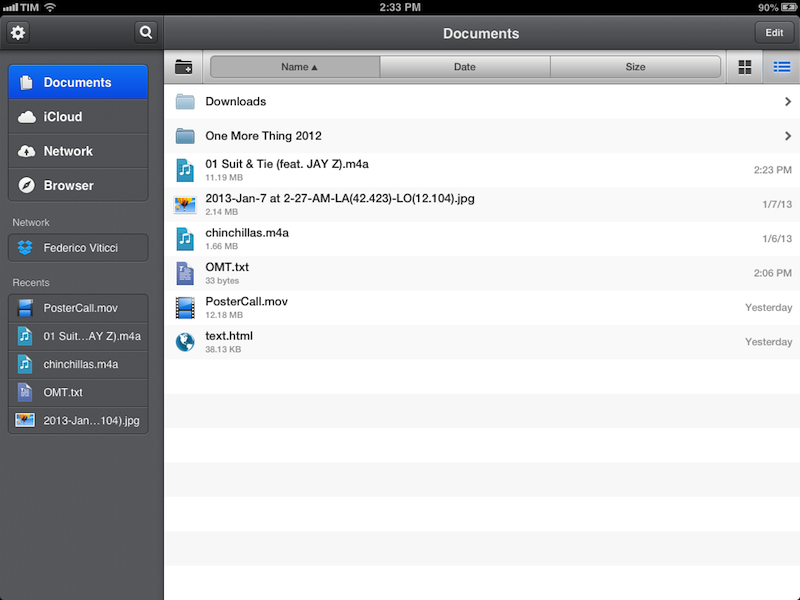 ReaddleDocs, Readdle’s file manager and document viewer for the iPad, has relaunched today as Documents, a free update for existing customers that introduces a refreshed interface and some new features.

In terms of functionalities, Documents basically shares the same capabilities of ReaddleDocs. The app can open the same file types, it can organize items in folders, sort them, and display them in icon view or list view. Unlike the OS X Finder, sub-folders in List view aren’t opened in the same column, but they’ll require you to open a different view that will display a Back button with the name of first level. As with ReaddleDocs, buttons to create a new folder, sort by name/date/size, and change views are displayed in a bar at the top that you can reveal by swiping down. A shortcut to create a new text file has been placed in a sidebar that you can reveal by hitting the Edit button.

To understand what Documents does, you can read our original review of ReaddleDocs 3 for the iPad. There are a series of web services supported by the app (including Dropbox) that you can access in the Network tab on the left. In the sidebar, the app also offers access to iCloud storage (which doesn’t come with List view), a built-in browser (to download webpages or part of them just like ReaddleDocs 3), and “Recents”. This last section provides quick access to the last five opened documents: as you re-open one, it will go to the top of the list again.

There are two changes between ReaddleDocs and the new Documents that aren’t so subtle and that I like. The web browser has a button to go from full-screen viewing to showing the sidebar, which I prefer to ReaddleDocs’ former “Close” button; however, I don’t understand the choice of removing the Google search field from the browser’s title bar, as users will now be forced to type google.com manually or create a bookmark for it. I’m a fan of Readdle’s in-app browser and the way it offers to save webpages as HTML or PDF documents (something MacStories readers know I have a particular affection for), though I keep thinking connected services (such as Dropbox) should be offered as destinations upon downloading a file.

If you want to quickly open websites in Documents, the app has a rhttp:// URL scheme that, similarly to 1Password’s one, will open a webpage in the app’s browser. Here’s a simple bookmarklet to take the current webpage from Safari (or any other iOS browser that supports JavaScript bookmarklets, such as Chrome) and send it to Documents:

The second improvement that I like is the media player. ReaddleDocs could already open a variety of audio and video formats, and Documents builds on that tradition offering a completely new design. The audio player looks like a mix of the iPad’s Music app and a standard file manager: there’s a list of songs on the left, and – while in landscape mode – a large album art on the right. The album art is smaller when in portrait mode, and I believe it would have made sense to find room for song lyrics (if available) here. 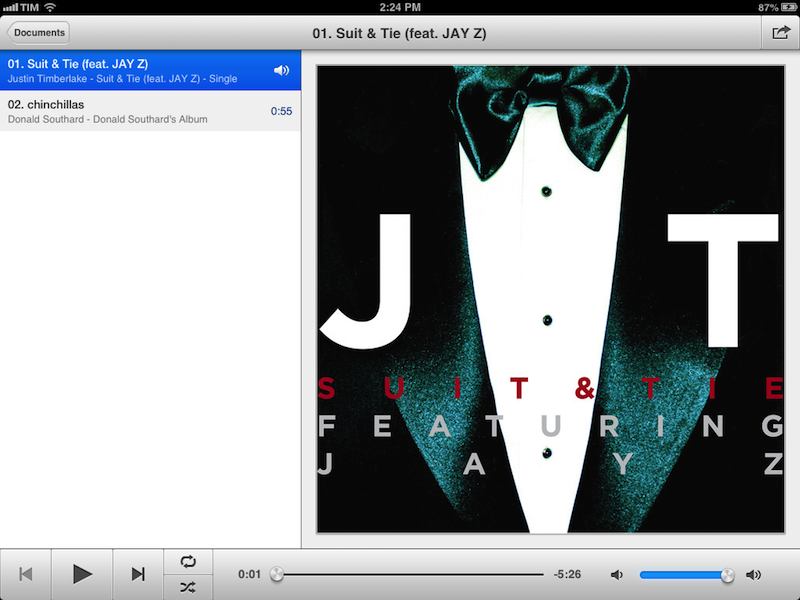 The video player is much more “native” than the previous one. I have used it extensively in the past weeks: I decided to buy the One More Thing conference session videos, and I put them inside Documents to watch them. Using the app’s Recents menu, video player, and built-in text editor, I managed to find a good way to open a video (the app remembers your position within the media player), then go back to a Notes file using Recents, and go back to the video again – all while using the same app.

The most visible change from ReaddleDocs is the app’s design. The UI chrome has been given a fresh coat of paint, some menus re-arranged, the colors toned down a bit. Overall, the app looks nicer and more modern.

Readdle is bringing file management in the post-PC era with Documents, a clean app that offers iCloud integration from the get-go and that mixes concepts familiar with iOS users (such as “Open In”) with a more PC-like approach to files and folders. Time will tell if this is the right solution. As it stands now, Documents is a fine piece of software (that is, if you already liked Readdle’s vision of document management), likely fulfilling every basic need of users needing to manage multiple documents on their iPads. The real test for Readdle will be offering seamless iCloud integration between this app and a (possible, I would guess) iPhone version.

Documents is available for free on the App Store.