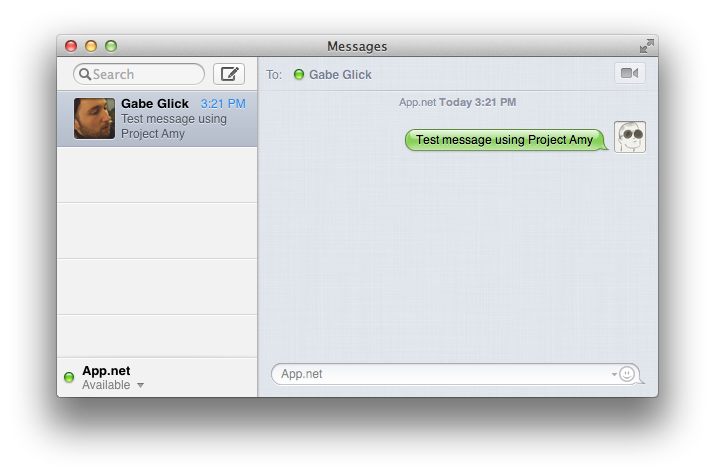 Developed by Steve Streza and released during last night’s App.net hackathon, Project Amy integrates App.net private messaging with the Messages application for OS X. A first version of Project Amy has been made available for download on App.net itself.

Project Amy is a clever experiment that showcases the App.net API and Apple’s IMServicePlugin.framework: using only public APIs and no proxies (unlike Steve’s first App.net project), Project Amy adds App.net as a native account in Messages, allowing you to have private conversations with other App.net users inside Messages. Once installed, you can simply login with your App.net credentials to have the account listed alongside AIM in the bottom left corner of Messages; choose Window > Buddies (or hit CMD+1) to show a list of users that you can send private messages to (they will be displayed as online with their full names rather than usernames).

Because it uses official APIs, messages sent through Project Amy also show up on App.net’s online messaging interface, Omega. In my tests, messaging with one or multiple users in Messages correctly mirrored the conversations to Omega, where they were updated in real-time without needing to refresh the webpage. I was even able to drag images into the conversation in Messages, and, while they didn’t show up as attachments on my end, they did appear as inline uploads on Omega and inside the recipient’s Messages application. Obviously, file uploads were handled by App.net’s File API as well.

Project Amy is a little buggy in this first version, but certainly promising. Aside from using an official OS X framework that few developers seem to know about, it shows the potential of the App.net API as a versatile solution capable of delivering more than just Twitter clones at this point.