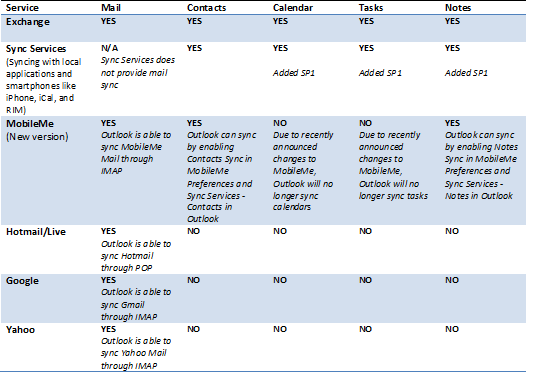 When I wrote the tutorial on how to get Gmail working inside Microsoft Outlook for the Mac, one of the things they didn’t include was Google Calendar syncing (even after a quick stability update). To be frank, they didn’t include any kind of syncing outside of the mail services provided by Exchange or IMAP. While the first service pack (arriving next week) will not be brining Google Calendar syncing to Outlook, Microsoft will be delivering a substantial update that will tie into your Mac’s Sync Services, meaning iCal calendars, tasks, and mail notes should be fair game. While it isn’t supported directly, you should be able to sync your Google Calendars with iCal, then to Microsoft Outlook. It’s a busy solution, but that’s not to say we’re out of options. For those asking (begging) me about writing something up about Google Calendar support, you’ll have the option to do it through iCal as of the SP1 update. In other words: bananas.

I also wanted to note a couple of the other new features coming with SP1:  Outlook support for Exchange based server-side rules; Outlook Redirect button (you can redirect the message to the intended recipient and the replies will go to the original sender); Outlook Resend button; Outlook edit of existing messages; and Solver integration support in Excel.

MobileMe syncing has be axed unfortunately, as MobileMe will no longer require Sync Services to communicate with your Mac. However, you will be able to sync notes down from MobileMe if anyone uses those.

[Office for Mac Blog via The Loop]