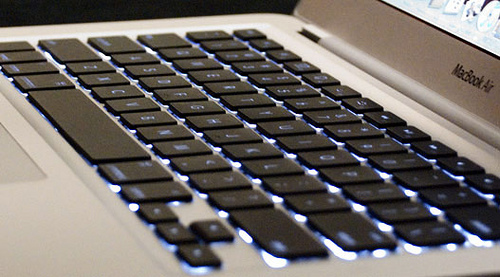 The new MacBook Airs expected to launch this week alongside OS X Lion may feature a return of the backlit keyboard that was omitted from the October 2010 redesign of the popular line. According to AppleInsider, people familiar with the matter have indicated that this month’s refresh will see the return of the backlit keyboard, together with new hardware improvements such as Sandy Bridge processors, Thunderbolt technology, and faster flash memory.

With the release of new models later this month, Apple is set to reinstate a feature to its MacBook Airs that went missing when the company overhauled the ultra-thin notebooks into more cost-affordable products late last year, AppleInsider has learned.

According to people familiar with the matter, backlit keyboards will join the string of hardware enhancements planned for the new 11.6- and 13.3-inch notebooks, which are also expected to adopt high-speed Thunderbolt ports, an upgrade to Intel’s Sandy Bridge architecture, and possibly high-speed 400MBps flash memory.

The lack of a backlit keyboard in the 2010 redesign of the MacBook Air family generated quite a backlash online, especially considering the previous iterations of the MacBook Air came with a backlit option by default. Many speculated Apple had to remove the backlit keyboard due to design issues and battery life constraints; the upcoming refresh is said to feature the same design of the 2010 MacBook Air, thus suggesting Apple has either figured out a way to implement the backlit system in the ultra-thin chassis of the machine, or listened to customers’ feedback and decided the feature had to return. A backlit keyboard helps in low-light conditions, and it’s currently implemented in all versions of Apple’s MacBook Pro line.

The new MacBook Airs’ part numbers have already leaked online, suggesting an upcoming refresh for the entry/upgraded 11-inch and 13-inch models. No details on whether Apple will tweak pricing of the line have surfaced yet, however, based on recent speculation, it seems fairly certain that the new machines will come with Lion pre-installed on a possible July 14th launch.