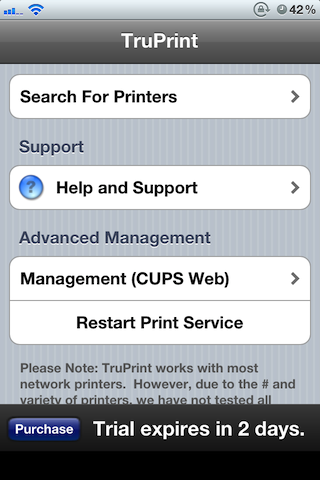 With iOS 4.2 Apple introduced AirPrint, a new system-wide technology that allows iPhone and iPad users to print emails, photos and just about any kind of document wirelessly without having to worry about drivers or configurations. The problem is, while Apple initially announced that AirPrint would work with a set of “officially supported” printers from HP and any printer also shared on a Mac or PC, issues arose with the OS X 10.6.5 update and Apple was forced to pull support for shared printers. The result: AirPrint only works with a bunch of printers from HP. Okay.

TruPrint is a new Cydia hack from the Intelliborn developers (the folks behind popular tethering and hotspot app MyWi) that promises to bring AirPrint support to hundreds of printers not officially listed by Apple as “compatible with AirPrint”. The app relies on Apple’s AirPrint technology, so iOS 4.2 is still needed to run it, but the support for Canon, Brother, HP and additional printers Intelliborn has baked into TruPrint looks impressive.

TruPrint is available in the Cydia Store at $9.99 with a 3-day free trial. If you’ve been looking for a solution to print to your favorite machine and you have a jailbroken device, this should be it. Check out the cool promo video below. [via iPhoneDownloadBlog]