Last night we reported that Apple’s new data center in Maiden, North Carolina is, according to many sources, ready to begin operations “any day now”. In the past weeks we heard rumors about Apple willing to double the size of the facility to 1 million square feet, being the current size 500,000 square feet.

Now it turns out Apple was planning to increase the size of the data center all along, the project is named “Dolphin” and the “phase 2” should include the aforementioned expansion. 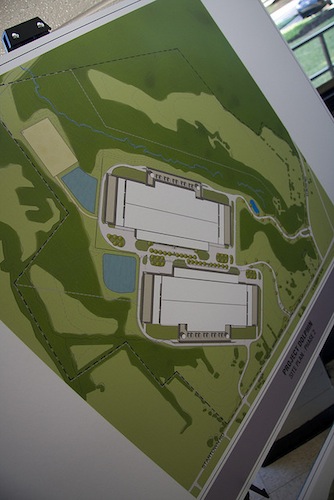 MacRumors and All Things Digital are referring to this image found on Catawba County, N.C Flickr page, showing detailed renderings of Apple’s facility, with two data centers next to each other. So perhaps Apple was planning to add more power and servers all along, since the picture was taken last summer. MacRumors also speculates that the publicized size figured referred to the total project with two buildings, thus bringing the size of the current structure to 250,000 square feet:

The discovery also raises the question of the size of the current facility. Public disclosures regarding the facility have always referred to it as a 500,000 square-foot project with a price tag on the order of $1 billion. Consequently, rumors of a doubling of the data center’s size assumed that that would bring the facility to a total of one million square feet. It seems possible, however, that the publicized figures in fact referred to the total project with both buildings completed, and thus the current building set to begin operation may only be 250,000 square feet.

Anyway we put it, it’s clear that Apple is betting on this data center. And we can’t wait to find out what it’s all about.