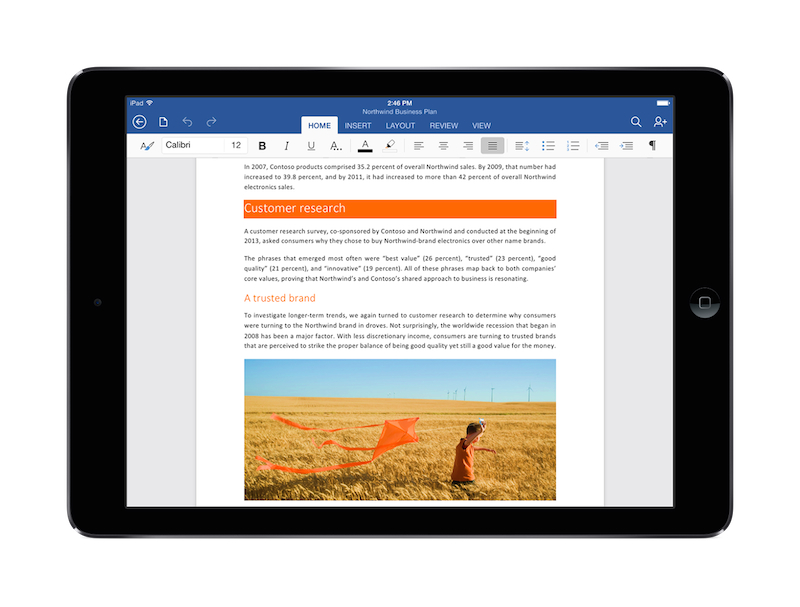 At a special event in San Francisco, Microsoft took the wraps off the highly anticipated Office for iPad today with a demo that showed Word, Excel, and PowerPoint running on Apple’s iPad. The three apps are launching on the App Store as a “freemium” experience: the download will be free, and free users will get the ability to view and present documents on the iPad; subscribers of Microsoft’s Office 365 service will be able to unlock the full experience of Office on iPad with editing features.

During the presentation, general manager of Office Julia White offered a demonstration of the editing and collaboration capabilities of Office’s three apps on the iPad. In the demo, White edited text and rearranged layouts in Word, stressing how the same features that users know from Office on desktop computers have been fully ported and redesigned for the iPad, taking advantage of the interface and functionalities of iOS 7. Touch controls for images, text reflowing, text formatting, and the possibility of manipulating charts inserted from Excel were shown on stage, alongside a collaboration feature that will allow users to collaborate on the same document in real-time. In Excel, White showed how the app could recommend the best chart layout for a specific set of data, or how the keyboard could switch from a classic layout to a different set of keys for numerical input. In PowerPoint, White edited a series of slides and started a presentation directly on the iPad, showing the app’s built-in animations, transitions, and traditional controls for offscreen presentations.

What makes these apps unique is that they strike just the right balance between being unmistakably Office and being designed for the iPad. If you use Office on a PC or Mac, the iPad apps feel very familiar, so you are comfortable and confident using these apps right away. The Ribbon layout and experience is familiar, with the most common commands under Home, and Chart commands automatically show up when you select a chart.

Office for iPad will use Microsoft’s OneDrive storage to keep documents and changes in sync across devices, but, unlike Apple’s competing iWork suite, Office will require an Office 365 subscription to unlock the full editing feature set. Microsoft offers a variety of Office 365 subscription plans that include Home and Business users, and, earlier this month, the company also announced a cheaper Personal plan that will start at $6.99/month.

Office on the iPad marks a major milestone for Microsoft, which was long rumored to be holding back the launch of the suite to promote Office on its own tablet, the Surface. The new suite of apps faces high-profile competition on iOS, with Apple’s iWork now a free download for new customers without a subscription and Google constantly iterating on its Google Drive client for iOS.

An official blog post from Microsoft with frequently asked questions is available here; we’ve included direct download links for Office for iPad below.