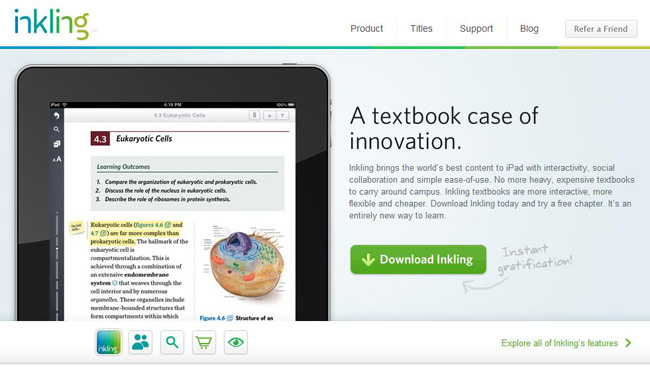 Inkling, an iPad textbook startup, has just announced that it has won financial backing from McGraw-Hill and Pearson, the two biggest names in the textbook business. The exact amount was not disclosed, except that it was a “multimillion dollar” financing.

Matt MacInnis, the Founder and chief executive of Inkling, said their goal involves using the content of an existing textbook then adding multimedia and interactive content for the iPad. Inkling started up right after the announcement of the iPad in January of last year. Based in San Francisco, the startup has now released 14 textbooks and more than 100 titles by this fall.

There is other competition building iPad textbooks, MacInnis acknowledged. Competitors like ScrollMotion, and Kno but he argued that everyone else is adding ‘limited’ features to a PDF of the textbook and that competitors e-books are developed by the publishers’ business divisions without very much input from the original textbook creators. Alternately, Inkling wants to publish apps that feel like they were built for the iPad, which means working with the books’ authors to create new content.

You can see an example of an Inkling app in-action in the above below. Thanks to backing from McGraw-Hill and Pearson, Inkling now has access to “95 percent of the content universe,” MacInnis said. Inklings’s actual production is far behind that amount because it doesn’t have the resources to convert every title. For now Inkling is very involved in the digital textbook-creation process, because it wants to establish nothing but high quality apps right away. MacInnis added that as time goes on it will move to a more self-service model.

When I was in college, I spent a ton of cash (not to mention the weight of the books) on textbooks, as many students still do today. Inkling’s technology could alleviate carrying around an entire bag of books and possibly cut down on the overall cost with quality textbooks via the iPad and App Store.