Just about everyone is talking about the iPhone 5, and while I remain skeptical of most rumors, I have to give MacRumors some props for commissioning CiccareseDesign to create a mockup based on a leak of the phone’s design specifications. Before we dig into the MacRumors’ render, I’m going to put my thoughts on the table (might as well at this point — all the cool kids are doing it). We don’t talk about these iPhone 5 rumors too often.

When This Is My Next published a crude mockup of the iPhone 5, Joshua Topolsky introduced his take on a tapered design — that the next iPhone would have a shape similar to the MacBook Air with a fat top which tapers down to a smaller edge at the bottom of the phone. But I think the tapered design means this: that the next iPhone is going to follow the iPod touch 4th gen’s design in that the buttons are going to be hidden underneath the display along the curved edges. Apple re-used the iPod touch’s 4th generation design with the iPad 2, and I see them continuing this design ethos with iPhone. When you look at the front of the phone, I do think Apple only wants you to see the display. Apple wants the lines of the phone to be very clean. I also agree with the idea that Apple will move away from the glass backing since it’s fragile and easily cracks when dropped — Apple doesn’t want damaged phones in the press or in Flickr photos online.

MacRumors’ “take-it-to-the-max” mockup of the iPhone 5 is interesting simply because it matches my idea of what Apple will do with the next iPhone. It nicely takes most of the rumors we’ve heard about for the last months and wraps it one nice package that looks believeable: you’ve got your oval home button (which could very well be a gesture area for flicking between apps as suggested by Gruber on The Talk Show), your edge-to-edge display (although MacRumors shows a 4” display — I think it’ll be smaller), and tapered edges which hide the volume buttons underneath the glass of the phone. 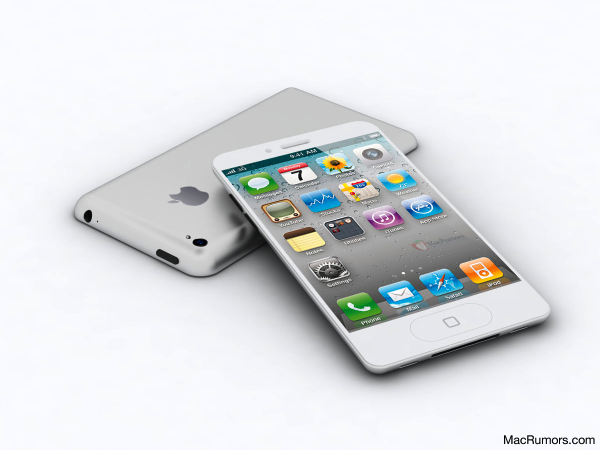 I think MacRumors’ mockup captures the idea that the next iPhone will be thin, a little wider, and more comfortable in the hand. The phone can’t be too thin — battery technology is still going to be a concern with iOS 5 between the Notification Center and new uses for location based data. We’re at point now with these rumors where we’ve gotten the general idea of what the iPhone will look like, and a lot of sites have shifted focus to release dates instead of speculating on features. Federico and I have been very careful not to spew a lot of these rumors onto the site (they’re not interesting enough most of the time), but MacRumors took a lot of these bits and pieces and actually did something very cool with it.

My concern — as always with rumors — is that it sets us up for a lot of false hope. “Man this iPhone looks so good I hope it looks just like this!” Then when the iPhone comes out, people are disappointed when a site’s mockup doesn’t turn out to be the real thing that they wanted. My suggestion is to look at the MacRumors’ mockup as the summary (but not the conclusion) of where we are with rumors and speculation on the iPhone. They’re confident that their rendering is very close to the final product, but I think seeing the final product will ultimately be more impressive.