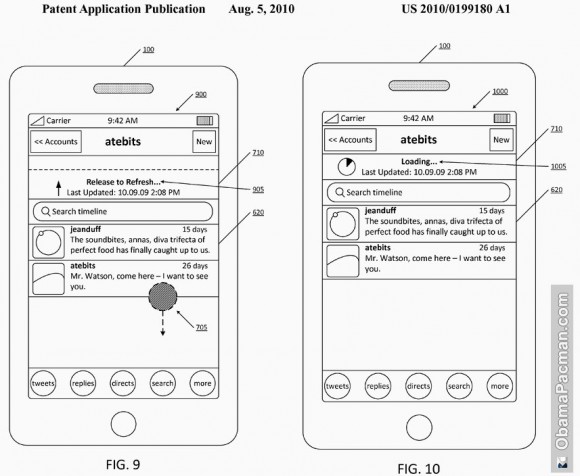 Circling around on the internet over the last few days has been the news that there is a patent application for the “pull-to-refresh” feature that Loren Brichter pioneered in Tweetie and is now an extremely popular UI gesture used in a lot of iOS, Mac and Android apps. Twitter holds the patent application, not Brichter who recently left Twitter after they acquired him and Tweetie a few years ago. It’s also important to note that the patent has not yet been granted, it is simply a patent application at this point in time.

Featured in the latest One More Thing podcast (a tie-in to the Australian iOS conference we wrote about last week, featuring many of the speakers), Brichter briefly talks about the patent (note that this was actually recorded before the news about the patent spread wildly on the internet) and says:

… I can’t talk about the specifics but Twitter owns the patent, but I don’t think people have anything to worry about.

Brichter also describes the design process that resulted in the “pull-to-refresh” feature being implemented in the episode. He talks about how in Tweetie 1.0 the refresh button would be on top of all your tweets because there wasn’t enough room on the navbar because of a back button and compose tweets button. But for Tweetie 2, Brichter thought he could “make it a little simpler” so that you didn’t have to scroll to the top, lift your finger and tap on the refresh button, instead he asked the question:

…why not just make refreshing part of the scroll gesture itself? So it was kind of an obvious extension of a simple idea.

The whole episode is certainly worth a listen, Brichter offers some great insights on development and his experiences as both an independent developer and a developer working in a large team (like he did for Twitter and Apple).

Thanks to Stuart Hall for the heads up.