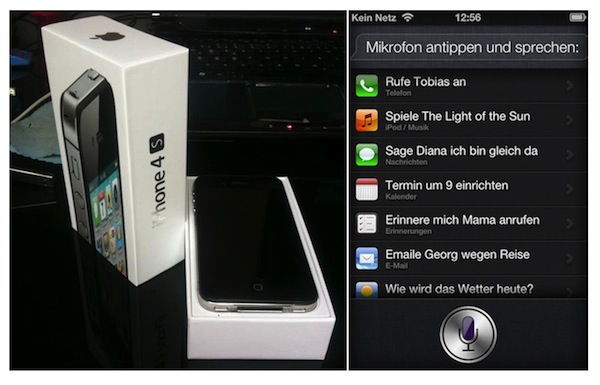 The iPhone 4S isn’t officially launching until Friday, October 14th, but a few lucky German customers have apparently received their shipments early, as reported by German website Macerkopf.de. The article explains an iPhone 4S pre-ordered through Deutsche Telekom arrived this morning at a customer’s house, who promptly shared photos of the packaging, device and Siri. The packaging looks fairly similar to the existing iPhone 4 box, and a screenshot shows Siri working in German – indeed, Apple has confirmed that the first beta version of its new voice assistant software will be available in English, French and German, with more languages to come in the future. More photos are available at Macerkopf.de.

This isn’t the first case of iPhone 4S photos ahead of October 14th – just yesterday we posted a video of someone showing off the iPhone 4S’ Siri settings and browser benchmarks.

Customers in the US have received shipment notifications by Apple and various carriers including Sprint, with delivery dates set to October 14th, when the iPhone 4S officially launches. Apple has announced 1 million iPhone 4S pre-orders in the first 24 hours of availability, and shipping times on the US Apple Store are now set to 1-2 weeks.