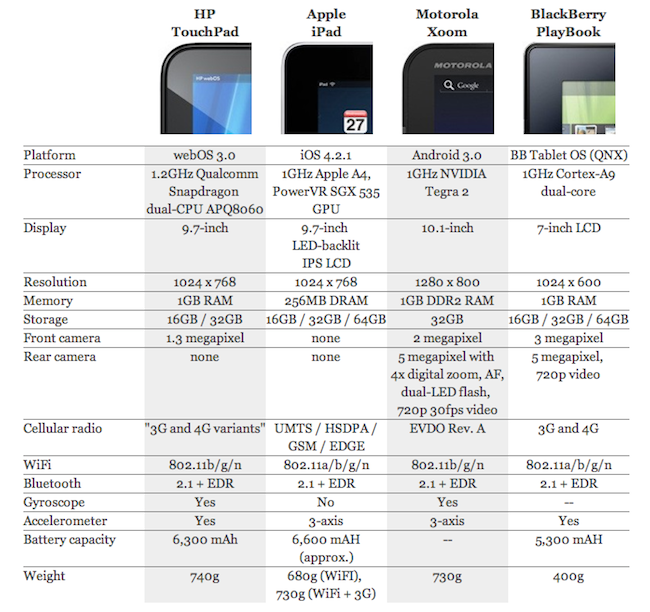 With today’s announcement of the HP TouchPad, we have a new tablet on the horizon. Even though HP says the device has “planned availability this summer”, the un-announced release date and pricing info don’t make the TouchPad any less interesting than it is. Personally, I think webOS was meant for tablets: beautiful and elegant multitasking interface, attention to details, sweet notification system, great photos app with full Facebook integration. And we’ve only seen a demo today. Overall, the TouchPad is promising and - this is the best part in my opinion - it could be the device not from Apple the Apple geeks will love.

In the comparison chart above, Engadget takes a look at the various tablets coming our way soon and the current generation iPad. The original iPad (which at this point should be refreshed very soon) still holds up pretty well, although the Motorola Xoom will sport a higher resolution screen (with 0.3 inches more, though) and the BlackBerry Playbook will have a dual core Cortex A9 processor. The iPad doesn’t have cameras, lacks a gyroscope and has only 256 MB of RAM.

The problem most of these tablets will have to face is the upcoming iPad 2 which is rumored to be faster, lighter, thinner and camera equipped. With iOS 5 also on the horizon for a June release, HP will have to consider both the new Apple hardware and software if they’re really pushing for a mid-summer release of the TouchPad.