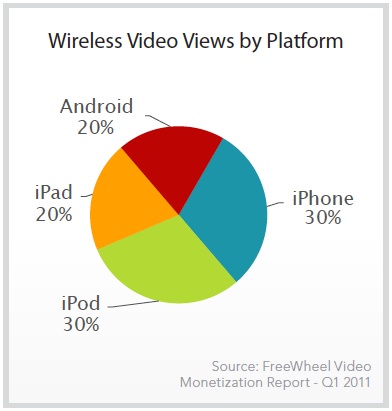 FreeWheel attributes Apple’s dominance in mobile video to the early lead the company has had in the mobile video market with their line of iOS devices. They also believe that greater viewership on Apple devices represents the adoption of video publishers and mobile developers who build their apps / videos for iOS devices first before moving to other platforms. Despite having sold just 20 million tablets worldwide, the iPad already accounts for 20 percent of videos viewed on mobile devices, according to FreeWheel. GigaOM said in their article that “We thought the iPad would be an ideal device for viewing video when it was announced, but the extent to which it has been embraced by even traditional video producers and distributors speaks to the power of the platform. TV networks like ABC and HBO have built applications for the iPad, as have pay TV operators like Comcast, Time Warner Cable, Cablevision and others.”

While mobile video viewing accounts for only one percent of all online video views, much of it is driven by news and live events. Mobile views peaked during the Japanese tsunami / earthquake crisis and also during the NCAA Men’s College Basketball March Madness Tournament. This makes sense because much of the Japan / basketball events happened during “working hours” when viewers turned to their smartphones and mobile devices because they couldn’t watch TV at work.

The 20 percent that the iPad gets is the biggest stat in my opinion; most people don’t take their iPad with them everywhere they go, like an iPhone or iPod Touch. Most people use it after working hours, and to have that 20 percent is outstanding. [via GigaOM]