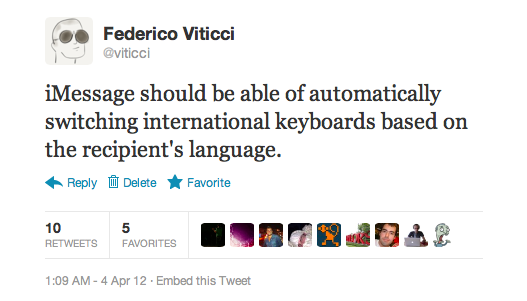 I like to think that sometimes Apple takes a look at the crazy ideas people share about iOS and OS X on Twitter, and picks a couple that they think could be neat additions to the OSes.

In April, I tweeted the following idea:

iMessage should be able of automatically switching international keyboards based on the recipient’s language.

The idea came from the fact that I’m constantly switching between the Italian and English keyboards on my devices. For most of my online communications, I use the English keyboard; for my Italian friends, family members, and acquaintances, I obviously use the Italian one. Wouldn’t it be neat if iOS could remember the last keyboard used with a contact, so that you wouldn’t have to switch keyboards every time?

Like I said, I like to think sometimes Apple listens. As @SiVola told me earlier today on Twitter, the Messages app of iOS 6 is now capable of automatically selecting an international keyboard based on the last one you used in a conversation. So, for instance, when I open a conversation with Chris, the English keyboard will be the active one; when I text my girlfriend, the Italian one will be automatically selected. No need to switch using the “globe” icon. 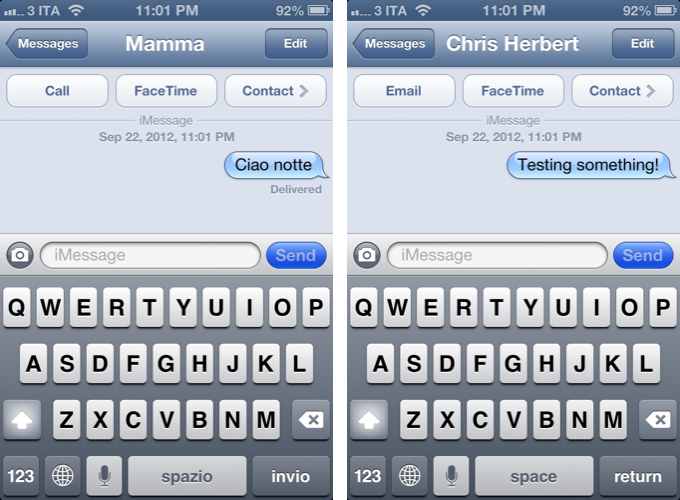 I tested this with various keyboards on iOS 6, and I can confirm it works. I tested on the latest version of iOS 5 to make sure as well – this is new to iOS 6 (and I hope it’s not a bug!); in my tests, it took 1-2 sent messages for iOS to “remember” the correct keyboard to use. Furthermore, Apple implemented this functionality in a way that it won’t affect the keyboard you have selected at a system-wide level: after I’ve sent a text to my girlfriend, I can open Tweetbot, and the keyboard will be in English just like I left it.

Of all the minor additions and refinements of iOS 6, this is now my favorite one. It’s the kind of detail that, to me, makes the experience more natural and fast without complicating my workflow with new menus or options to learn.

Perhaps Apple didn’t read my tweet. Or maybe someone did. Whatever the story is – thanks for this feature, iOS team.