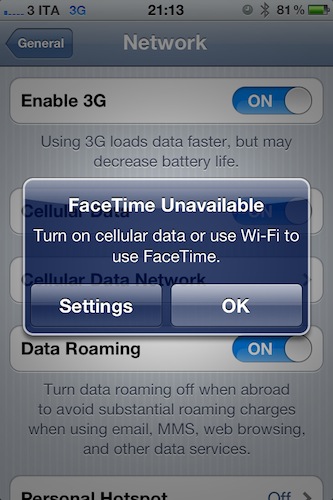 9to5mac has posted a screenshot passed along by a reader, in which iOS 5 shows an alert box asking the user to turn on cellular data or WiFi to use FaceTime. By playing around with the iOS 5 preferences in Settings->General->Network, we’ve found how to replicate the “issue”: turn off Cellular Data in the Network tab, open FaceTime’s prefs inside the Settings app, and you should get the alert box. If it doesn’t come up, try to turn FaceTime off and on again, making sure Cellular Data is still set to off. iOS 5 will tell you that you need data (3G) or WiFi to use FaceTime.

This could be big news for iPhone and iPad owners as FaceTime is currently restricted to WiFi networks, with many obviously speculating that the carriers forced Apple to make FaceTime available only on faster WiFi connections. On the other hand though, it needs to be mentioned that the jailbreak tweaks that enabled FaceTime on 3G on iOS 4.3 proved that, with less than optimal 3G speeds, FaceTime could be pretty terrible without WiFi.

However, there’s one last piece to consider: at the WWDC ‘11 keynote, a slide showed by Scott Forstall on stage briefly hinted at improved video quality coming in FaceTime on iOS 5, alongside mid-call invitation alerts. See the image from This Is My Next’s liveblog: 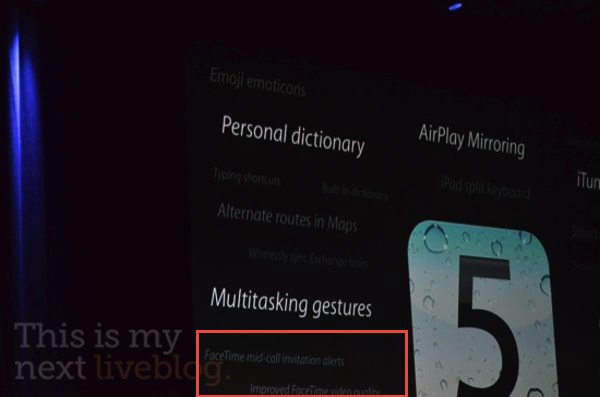 Whether this means iOS 5 will finally bring the possibility to video call on the go it’s unclear at this point, and there’s a very good chance the alert box above is simply an iOS bug from the first beta. Or, Apple could be really working closely with selected carriers to enable FaceTime on 3G, at no additional costs.