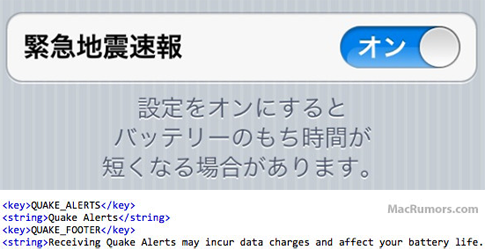 As discovered by a 9to5 Mac reader, iOS 5 contains a new ‘Quake Alert’ notification option to warn Japanese users of an expected earthquake. This new notification option simply hooks into the Japanese earthquake warning system and does a similar job to what some apps on the App Store already do, just on a simpler level that doesn’t require a third party app.

As this year’s devastating earthquake and ensuing tsunami in Japan tragically showed, such early warning systems are extremely important in getting just a little bit of time to prepare. Since the earthquake this year, Time has published an article that detailed the Japanese earthquake warning system:

Japan has the most advanced earthquake early-warning system in the world. A nationwide online system launched in 2007, it detects tremors, calculates an earthquake’s epicenter and sends out brief warnings from its 1,000-plus seismographs scattered throughout the country, one of the most earthquake-prone nations on the planet.

As MacRumors points out, this early warning system notification for the iPhone won’t be the first time the system has been integrated into a Japanese smartphone, with quite a number already featuring the system. Japanese users will be able to turn the ‘Quake Alert’ notification on and off from the Notification Center settings pane - although there is a warning that receiving quake alerts may impact on battery life (due to the connection to the early warning system.