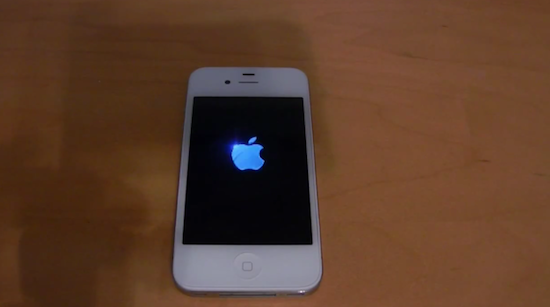 Among the changes spotted in the second iOS 5 beta seeded to developers on Friday, a couple of new additions had developers and Apple fans alike buzz with excitement over what could be coming in the final release of the OS expected this Fall. The first new, slight change in the iOS 5 code is a new startup animation that, upon a device’s first boot after it’s taken out of the box or restored from iTunes, will display a glowing Apple logo, before taking the user to the new Apple ID-based setup process with iCloud integration. The same setup process introduced in beta one has been overhauled to enforce the requirement of an Apple ID and visualize a device’s IMEI and ICCID codes. You can check out a video of the (brief) animation after the break.

A major change in iOS 5 could be the possibility of doing OTA software updates over 3G. Whilst Apple had already confirmed that iOS 5 would be capable of updating devices wirelessly, with delta updates, and even displayed an iPhone on 3G while doing so with an iOS 5.1 placeholder, there wasn’t any carrier support confirmation by Apple at the WWDC ‘11 keynote, leaving tech pundits wondering whether, especially in the much trafficked US networks, AT&T and Verizon could be demanding Apple to block even the smallest software updates over a cellular network. According to 9to5mac, some code strings in the iOS 5 beta seem to confirm Apple is baking the functionality to update a phone or iPad over 3G, though it’s obviously not clear whether the carriers could limit this feature.

Last, iOS 5 beta 2 has introduced a new CSS property that will allow web developers to build web apps powered by native-style momentum scrolling, as noted by Johan Brook. The code is the following:

This is huge for web apps. No more custom Javascript to fake the native behavior, like iScroll and lately Scrollability from Joe Hewitt. Even Apple has written their own internal web framework (“PastryKit”) to patch up things like scrolling and fixed positioned elements. Scrollability is the best fake-native scrolling I’ve seen so far, and the one in apps built with Sencha Touch is pretty sharp as well, but I don’t think they can beat this alternative provided by Apple.

There’s indeed a noticeable difference in momentum between scrolling in native apps and in web pages. It’s maybe the one single thing that makes you think: “Oh right, this is a web app”.

Daring Fireball’s John Gruber detailed the efforts Apple had been putting into creating a better JavaScript framework to improve behavior of web apps for iPhone in 2009, called PastryKit. The framework was aimed at bringing things such as position-fixed toolbars and momentum scrolling to Apple’s own web apps (video demos), features that the company is now baking into iOS 5.

The JavaScript source code has been minimized/optimized, but it’s not obfuscated, per se, so it’s easy to see that the framework is called PastryKit, and even a dilettante JavaScript hacker like me can follow along and see some of what’s going on. PastryKit accomplishes all three of the aforementioned things — hiding the MobileSafari address bar, providing fixed-position toolbars, and providing scrolling with momentum — by disabling regular scrolling and setting up its own view hierarchy and implementing its own scrolling.

A better video of the boot animation, courtesy of Mark Gurman.