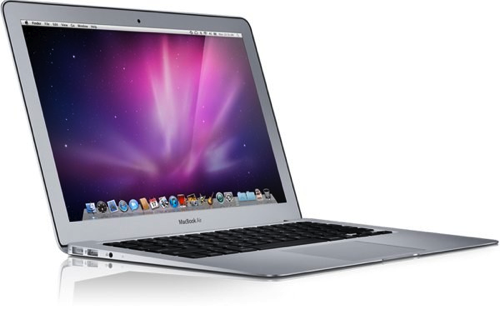 CPU World reports (via MacRumors) that Intel is working on a series of new Core i5 and Core i7 ULV (ultra-low voltage) processors based on the Sandy Bridge architecture which, offering improved speed and graphics performances over the previous-gen Arrandale CPUs, might be a suitable choice for Apple in the next generation of MacBook Air models. The three new processors, Core i5-2557M, Core i7-2637M and Core i7-2677M, increase clock speed from 1.4 GHz and 1.6 GHz to 1.7 GHz and 1.8 GHz, with turbo boost frequencies set at 2.8 GHz and 2.9 GHz. With increased speeds, performances and the same 17 Watt thermal envelope, the new CPUs might as well end up being used by Apple in the MacBook Airs rumored to receive a Sandy Bridge and Thunderbolt update in June or July.

Two forthcoming Core i7 ULV dual-core processors, i7-2637M and i7-2677M, have 1.7 and 1.8 GHz base, and 2.8 GHz and 2.9 GHz Turbo Boost frequencies. This is 200 MHz higher than the frequencies of their predecessors, Core i7-2617M and i7-2657M. Default clock rate of the HD 3000 graphics on new chips stays the same, 350 MHz, although the maximum turbo frequency is increased to 1.2 GHz. The microprocessors boast 4 MB level 3 cache, and support HyperThreading and Vpro technologies. It is interesting to note that, despite of having lower processor number, the Intel i7-2637M SKU will be faster than the i7-2657M.

Low power consumption and speed are obviously factors Apple considers when selecting the processor to implement in thin and lightweight machines like the MacBook Airs. Whilst no release date has been announced by Intel yet, Apple usually gets components from Intel earlier than other companies, leading to speculation that the upcoming Air refresh may include the update Core i5 and Core i7 CPUs. Several reports in the past months indicated was working on a new version of the MBA line, last updated in October 2010, featuring Thunderbolt connectivity and faster processors following recent hardware changes to the MacBook Pros and iMacs.