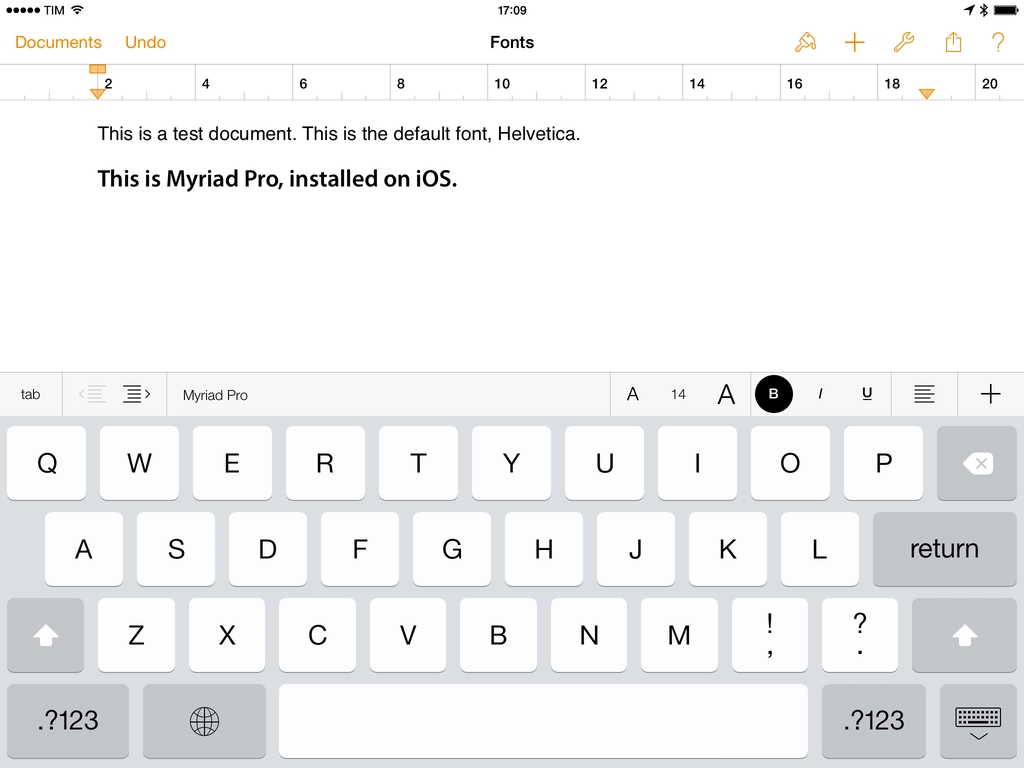 A new app called AnyFont and developed by Florian Schimanke allows you to install custom fonts on iOS. By leveraging iOS 7’s capability of installing fonts through a configuration profile (Apple’s documentation here), AnyFont can take fonts as standard TTF and OTF files from the app’s own storage and install them on iOS so other apps such as Apple’s iWork suite will be able to use them in the font picker.

I was able to test the app (which was first covered by TUAW in early March) and talk to Schimanke, who confirmed that AnyFont “does exactly what you could do on a Mac with the Apple Configurator”; while installing a custom configuration profile may raise security concerns, he added that it’s possible to look at the contents of the profile and see that the one created by AnyFont contains only font files that the user wants to install.

AnyFont takes advantage of a less known feature of iOS 7, and it’s quite clever in its implementation. Fonts can be copied in the app using iTunes’ file manager on a Mac or PC, but the app also supports the “Open In…” menu to receive TTF/OTF files, or a .zip archive with multiple files inside it. Once received by the app, fonts can be selected and the app will generate a profile for multiple fonts; with the profile installed, I only needed to restart Pages for changes to take effect and use the custom fonts. AnyFont is available at $1.99 on the App Store.

AnyFont, however, isn’t the only way to install custom fonts on iOS 7. Last week, MyFonts added support for installing a font from the service’s purchase history using the same profile technique:

We have great news for you! As of today you can install any font – a new purchase or previously downloaded package – from MyFonts onto your iOS 7 device and use it in apps with a font menu such as Pages and Keynote.

Try it out! Grab your iPad or iPhone and head over to your MyFonts order history and choose from any of your past font purchases. Hit the blue “Install on iPad” or “Install on iPhone” button.

This is also a nice use case for Pythonista’s Open in… menu integration. You can select this script in Pythonista’s settings as the handler for opening files from other apps. Then just download a TTF file with Safari, and open it in Pythonista, which will automatically launch the script to install the font (the script gets the file path as a command-line argument).

If you launch the script directly, without using the Open in… menu integration, you’ll simply be asked for the URL of a TTF file you’d like to install.

The script can be downloaded here, but custom fonts aren’t currently supported in Zorn’s text editor, Editorial for iPad.