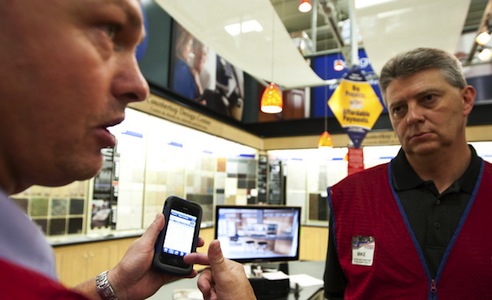 US home improvement and appliance retailer, Lowe’s, has revealed that it is undertaking a significant technological upgrade over the coming months. In addition to overhauling its website, the store is replacing decade old technology in its stores by deploying new technology and products such as iPhones.

The store chain is spending a record amount on technology over this fiscal year, replacing 72,000 computer screens with flat panels, adding WiFi to stores for customers to use and purchasing more than 42,000 iPhones (that’s 25 for every one of Lowe’s 1700 stores).  The iPhones will replace scanner guns from the 1990s and staff will now be able to check product information or even view how-to videos, right as they stand next to the customer.

“Forget about the competition, we are playing catch-up with the customer psyche,” Mike Brown, Lowe’s Chief Information Officer, said.

The iPhones will also eventually be enabled to do more tasks including calling customers or suppliers, emailing, text-messaging as well as processing credit card purchases - similar to how the iPod Touch is used by Apple in their retail stores.