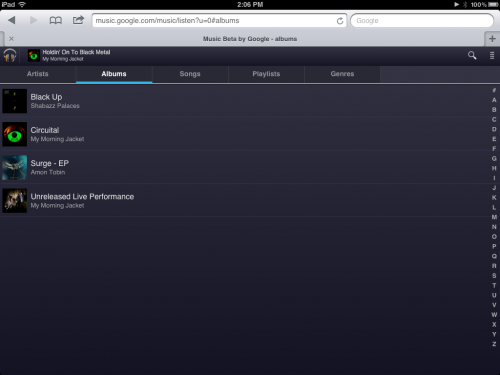 Announced with a tweet a few minutes ago, Google has rolled out an iOS-optimized (iOS 4 or later is required) web app for Google Music, the company’s invite-only cloud locker that allows users to upload music to Google’s servers. The web app can display music libraries and play songs from an iPhone, iPod touch or iPad running iOS, with a dark interface that’s also been optimized for the iPad’s larger screen with tabs for Artists, Albums, Songs, Playlists and Genres.

The web app has a search function for large libraries, lacks any upload feature on iOS devices, and because it acts as a standard audio source on iOS from Mobile Safari, it can run in the background and be controlled from the multitasking tray. The app supports swipes to switch between album and artists, and overall it looks like a very slick experiment from the Music Beta design team. The Next Web has the first details and screenshots:

The app looks pretty great and feels much snazzier than your average Google app. Hopefully this is a sign of good design to come. Functionally it is a pure ‘player’, with no ability to upload any music or browse any catalogs of music, much like the rest of the Google Music service at the moment.

If you’ve been invited to Google Music, you can check out the new web app from your iOS device at music.google.com. Google Music Beta was first launched in May with no iPhone-optimized interface.