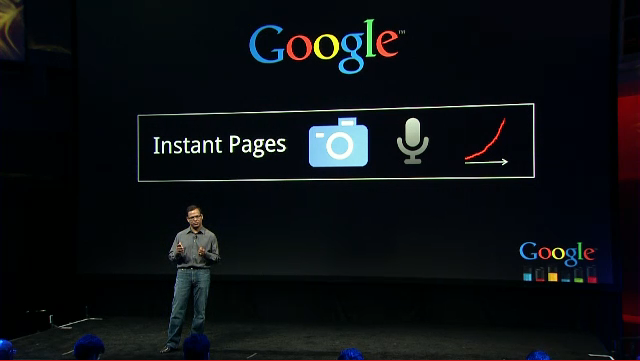 Google is wrapping up their latest innovations in search out of San Francisco this afternoon during today’s Inside Search press conference for June 14th, 2011, and avid Google users will want to know what Google is bringing to the table to bring you better, more accessible, and faster results from all of your devices.

First up, Google is launching Google Instant for Mobile, which is very similar to Google Places, but right on the Google Mobile homepage. The next time you’re out and about, simply launch Safari and visit the homepage to access location based shortcuts that’ll help you find food, drink, fuel, and more with simple tap based navigation. The results are integrated with Google Maps, so you can location based results closest that are ranked closest to you. On top that, you’ll have access to phone numbers, reviews, and directions from a pull down menu under each result.

Search gets a facelift on mobile as well: you can now build search queries by combining multiple words via a drop-down menu and a plus button. What’s great about this is that the limited space in a mobile search bar can now be supplemented by building words to create powerful search phrases.

Google is also integrating Voice Search on the desktop, which has been working incredibly well on my Android handset and iPhone via Google’s search app. Again, it’s a feature that’s baked right into the Google Homepage: simply click the microphone in the search bar, and say (or yell) a phrase to search for your query.

On Google Images, Google is launching the ability to search with an image. In the Q&A sessions, Google says they treat photo searches just like text searches - they retain the image in accordance to their publicly accessible privacy information. Simply upload an image or point to an image’s URL, and Google will try to find images that are similar to yours. If you upload a picture of a friend, Google made it very clear that they are not using facial recognition to find people, but are simply comparing pixels to find results. So this might be a fun way to see who you look like on the Internet, and of course this is going to make searching for MacBook photos that much easier. School research just got pretty awesome if you ask me. Google claims that image-based searches work well for things that are well-documented on the web - for example, a famous building like the Eiffel Tower would allow you to bring up comparable photos for that landmark.

In order to deliver fast results, Google is also adding Instant Search to images. This can mean both good and bad things depending on your moderation settings; hopefully things remain in good taste as Google puts their prediction technologies to use.

But prediction itself was a topic today, as Google is bringing something called Instant Pages to Google Chrome. Available in all of the beta and dev versions of Google Chrome, Instant Pages is Google’s answer to the pre-fetching features built in to Mozilla’s Firefox. Instead of simply scraping basic HTML information ahead of time, however, Google says that their pre-rendering will grab other resources as well such as Javascript for snappy page loading. Instant Pages are only being used for search results (not targeted for ads specifically), but Google did mention they’ll be looking at how to best deliver ads to consumers in the future. Instant Pages may shave two to five seconds off of each query, which is huge considering the amount of time we spend finding things really adds up in the long run.

[via The Official Google Blog and The Google Mobile Blog]