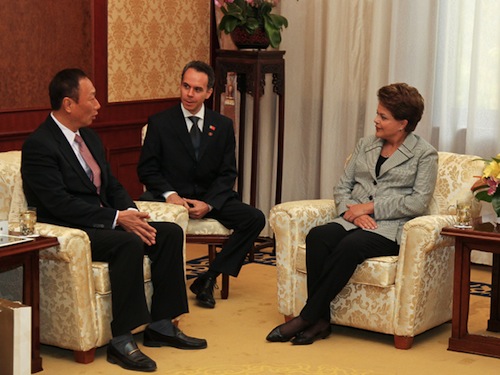 During a meeting in Beijing between Brazialian’s President Dilma Roussef and Hon Hai Precision’s founder Terry Gou, the company has announced subsidiary Foxconn is planning to invest $12 billion to start producing monitors and displays for mobile devices in Brazil. The news has been reported by several Brazilian publications (Globo Economia, Folha) as well as Reuters Africa. Foxconn assembles a variety of electronic products for Apple in its Chinese facilities, including iPhones and iPads.

According to the reports, the formal announcement was made by Roussef, whilst Brazilian minister of Science and Technology Mercadante has been negotiating with Foxconn for more than three months to convince the company to invest $12 billion throughout the next 5 years. The project would involve the recruitment of 100,000 new employees (including 20,000 engineers) as Foxconn already has three factories in Brazil to assemble products for Sony, Dell, and HP. Both articles from Globo Economia and Folha.com report minister Mercadante said during the meeting that Foxconn will begin assembling iPads for Apple in Brazil starting November 2011. This follows speculation from the past few days where we reported Apple was considering opening its own facility in Brazil to assemble iOS devices – but at this point it appears that the rumors were actually pointing at Foxconn planning an investment in the country to include – among others – production of iPads.

The Taiwanese firm Foxconn to invest U.S. $ 12 billion in Brazil over the next five years to produce displays (screens), said on Tuesday the president Rousseff. The company, which already has five plants in China, also announced it will mount iPads in Brazil from November.

The Ministry of Development, Industry and Foreign Trade held until Friday (15) public consultation on the conditions for the inclusion of tablet computers (laptop computers with no keyboard and touch screen) in the Basic Productive Process (PPB), which would allow tax reduction equipment. The Communications Ministry, who requested the consultation, estimates that with the inclusion in PPB, the tablets will be reduced by up to 31% in price compared to imported ones, since the IPI would drop from 15% to 3% and VAT, if production is in Sao Paulo, from 18% to 7%.

No details about a Foxconn new facility or its possible location have been provided in the reports.

Update: a new article from Reuters confirms Foxconn will begin assembling iPads in Brazil by the end of November, although talks are still ongoing about the investment with the Brazilian government:

The Brazilian government is studying Foxconn’s investment plan, President Dilma Rousseff told reporters during a visit to Beijing, where she is meeting with Chinese President Hu Jintao.

“You’ve got an ample range of investments that go from $300 to $400 million to $12 billion over 5 to 6 years in the case of Foxconn,” Rousseff said, speaking of discussions Brazil’s government is having with various technology companies.

“They’re proposing a partnership. They came to us and said we want to invest in Brazil.

The report states Foxconn is looking to gradually move its production plants out of Shenzen, China, due to increased labour costs.