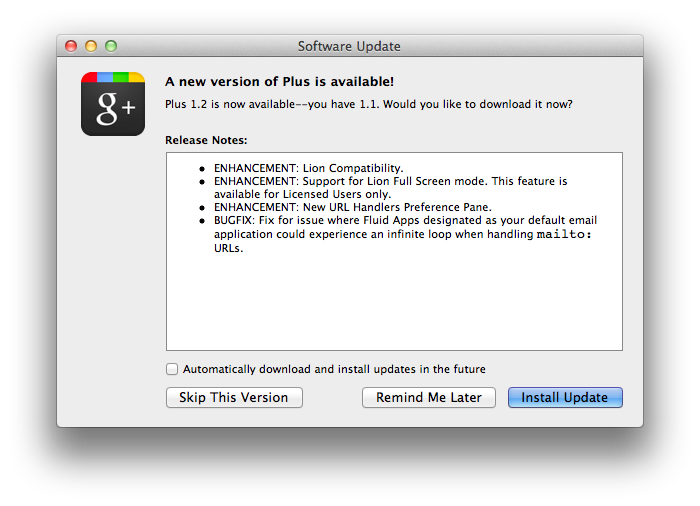 With OS X Lion expected to make its public debut on the Mac App Store in the next few weeks, it is no surprise developers are starting to release updates to their applications to support the new OS and introduce features built upon the new APIs created by Apple. Last night, Panic released four updates to bring Lion support to Coda, Candybar, Transmit and Unison. Fluid App, the popular tool to create native applications for OS X off any website or web app, has also been updated to bring proper Lion compatibility, a few bug fixes and, more importantly, support for Lion’s full screen mode.

Whilst Lion compatibility can be seen in the Fluid changelog here, full screen support is listed under changes to Fluid apps. Indeed,when I opened the Google Plus Fluid app I created earlier this week, I was prompted to perform an update in-app to enable Lion and full screen support, as well as new URL handlers in the Preferences. As with most Apple apps on Lion, full screen mode can be entered by hitting a keyboard shortcut, or pressing an icon in the upper right corner. To return to the standard window view, you’ll have to click the (blue) full screen icon in the menubar again. Animations for my Fluid app on my late-2008 MacBook Pro with SSD were fast and smooth. 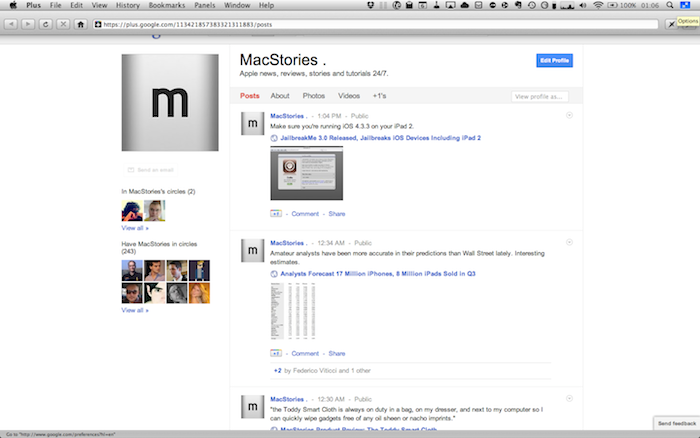 Fluid App is available for free, but you can purchase a license at $4.99 via Paypal to unlock additional features like the aforementioned full screen on Lion, separate cookie storage and possibility of pinning apps to the OS X status bar.