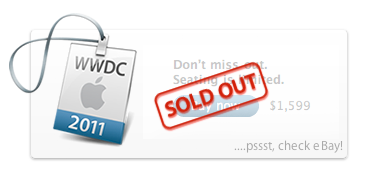 If you missed out on snapping up a WWDC ticket, which is very likely considering the tickets sold out in less than 10 hours, but still desperately want one you could consider swallowing your pride (and emptying your wallet) by jumping on eBay. There has been at least one developer selling his extra unactivated ticket that was supposedly meant to go to a colleague who decided he couldn’t make it out this year.

But unsurprisingly the ticket is being sold at an insanely inflated price of US$3,500 – more than double the original price of $1,599. In fact that’s nearly $2,000 more.  Whether or not the story from the seller is genuine, this ticket scalping will probably attract the attention of Apple’s legal department. But it’s unlikely to stop others from at least attempting to resell their tickets, given the incredible demand for tickets – so if you are desperate you may want to keep your eye out on eBay, Cragislist and even Twitter.