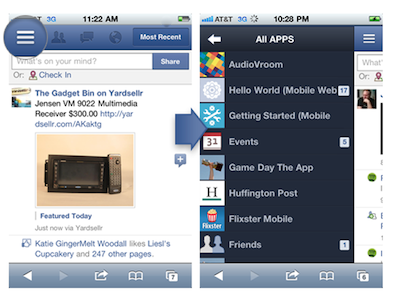 Back in July TechCrunch revealed that Facebook had already developed an iPad app that was live inside the iPhone app. It seemed feature complete, which has confused many as to why Facebook has taken so long to launch it — they didn’t even launch it at last week’s f8 conference. If MG Siegler of TechCrunch is correct (which he has been for many Facebook scoops this year), it has been waiting on another of Facebook’s Project Spartan and various negotiations with Apple - as was reported this week.

Earlier today another TechCrunch writer, Alexia Tsotsis found some screenshots of Project Spartan (see above) which MG Siegler believes to be the real thing. He writes this morning that “the planets are aligning” and that the Facebook iPad app and Project Spartan (of which both have seen delays and delayed each other) will launch next week.

According to him Apple has been involved with both projects and that the two companies have been collaborating on both projects. His sources note that the two Facebook projects may launch at next week’s Apple event (Mashable also suggests this), potentially as part of a demonstration that shows off improved HTML5 support on iOS. But if that arrangement falls through Facebook will apparently reveal the two projects during a Monday event.

But make no mistake, the relationship between the two companies is tenuous at best. Both know that they’d probably be better of working together, but both also believe that they don’t actually need each other. Hence, the dancing we’ve been seeing and hearing about. The two are frenemies. But the launch of Google+ has made the common enemy very clear…

Project Spartan is an HTML5-based development and distribution platform that’s being built with Mobile Safari for iOS in mind. When MG Siegler first posted about Project Spartan in mid-June, he described the purpose of it as:

Facebook will never admit this, but those familiar with the project believe the intention is very clear: to use Apple’s own devices against them to break the stranglehold they have on mobile app distribution. With nearly 700 million users, Facebook is certainly in the position to challenge the almighty App Store distribution mechanism. But they need to be able to do so on Apple’s devices which make up a key chunk of the market.