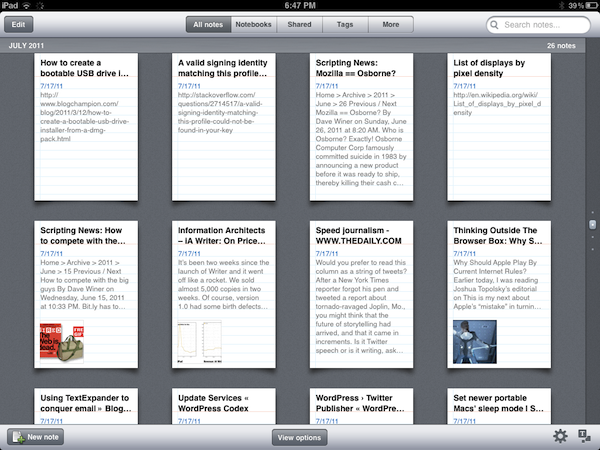 Teased at the first Evernote Trunk Conference last week, the long-awaited new version of Evernote for iPhone and iPad has been released today on the App Store, bringing much requested features to the iOS platform such as rich text styles, new iPad UI, support for shared notebooks and more. Evernote 4.1 for iOS is available for free here, whilst the Mac version’s publicly available beta still reports “beta 4” as the latest one.

Evernote’s biggest change on iOS is the possibility of creating and editing notes with rich text styles. Whereas previous versions of the mobile app forced users to always edit notes in plain text – thus breaking styles coming from the desktop app – Evernote 4.1 allows basic creation of numbered and bulleted lists, as well as sections, paragraphs and blockquotes straight from an iPhone or iPad. Obviously, users can now also select text to make it bold, italic or underlined, with more options such as strikethrough and highlight available in a new formatting bar. To create or edit styles, Evernote uses a new tabbed toolbar on the iPhone that enables users to switch between styles (the uppercase A button),  attachments (images, audio notes, new photos), and note information such as notebook, tags, and location. 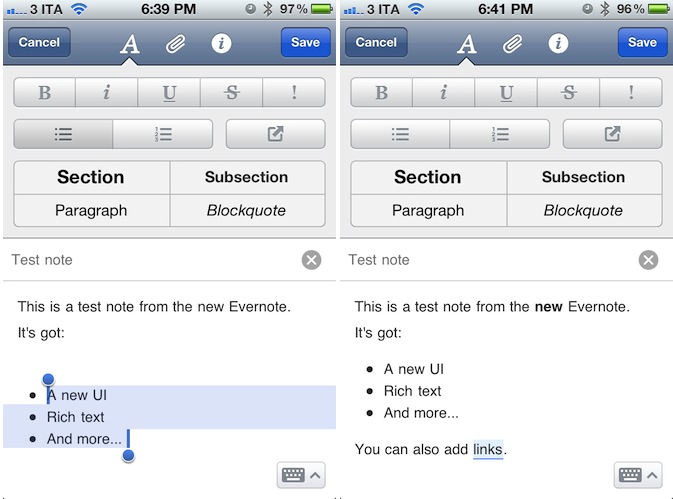 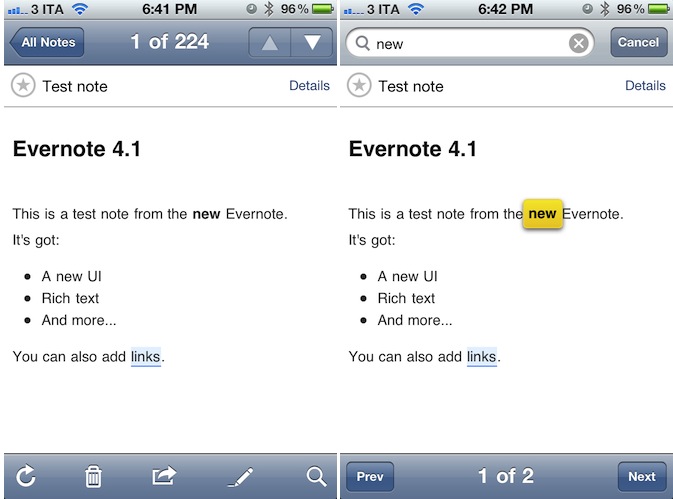 The Evernote team explains some of the limitations of rich text editing on iOS:

If you try to edit a complex note, you’ll be presented with new options: Append or Simplify. Append will add your additions to the end of the note. If you choose Simplify, Evernote will simplify the styles in the note to ones that are editable, which means that some complex styles may disappear. If you want to get back to the original, you can fish it out of the trash.

Evernote updated its iPhone app with a cleaner UI for note creation months ago, but admittedly this new version feels much nicer in comparison thanks to a clever usage of screen space, and elegant design. To edit a note and append rich text styles, users have to tap on the “edit” button when viewing a note, then manually select the text they wish to style – it works similarly to any desktop app in that you select text and then press a button to style it.

The iPad, however, got the most substantial update this time, as Evernote for the tablet has added both new features and a completely redesigned interface that falls in line with what Evernote is doing on the Mac with the upcoming Lion-focused update. Evernote for iPad now comes with rich text styles available from the toolbar of the floating editing window (for some reason, Evernote still won’t let you edit notes in full-screen on the iPad), and some controls such as sections and sub-sections placed inside an easily accessible popover. The main window, though, now lists notes as large thumbnails that provide a good overview of a note’s text, included images, and creation date. Just like the Mac’s beta version, the new Evernote for iPad displays notes under month headers, with sorting options available in the bottom toolbar to display notes by date created or updated, title, notebook, city, or country. 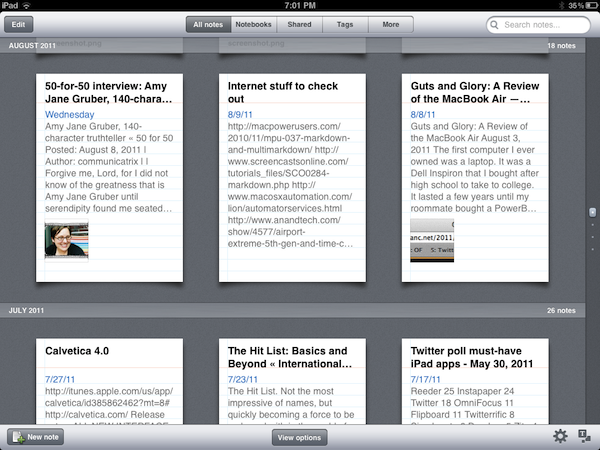 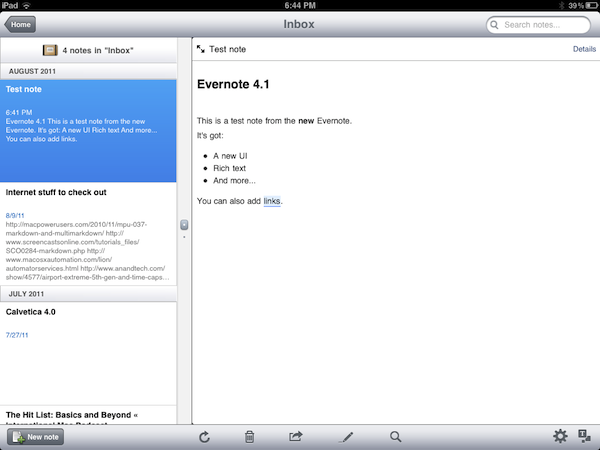 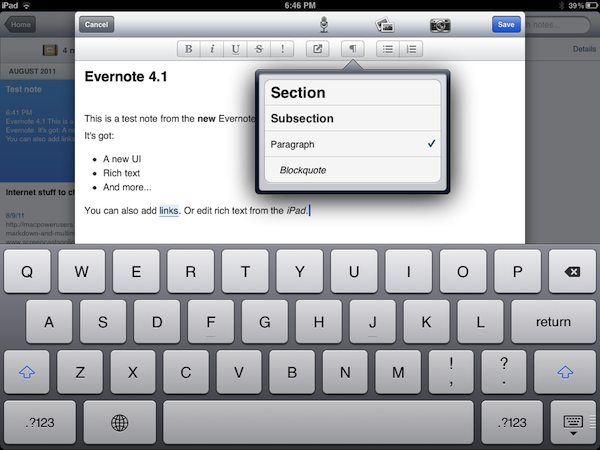 Another important addition to Evernote 4.1 are shared notebooks: requested since the first version of the app came out for the iPhone years ago, Evernote users can now access notebooks shared with others just like any other normal notebook (though they can’t create or edit notes in them just yet). Plus, Evernote is now allowing Premium subscribers to set a passcode lock for the app, which you can adjust in the app’s settings. Other interesting “little touches” of this update include pinch & zoom on the iPad to reduce or increase the size of the note list, search within individual notes, and a new tap action to select an image inside a note, and start a slideshow. 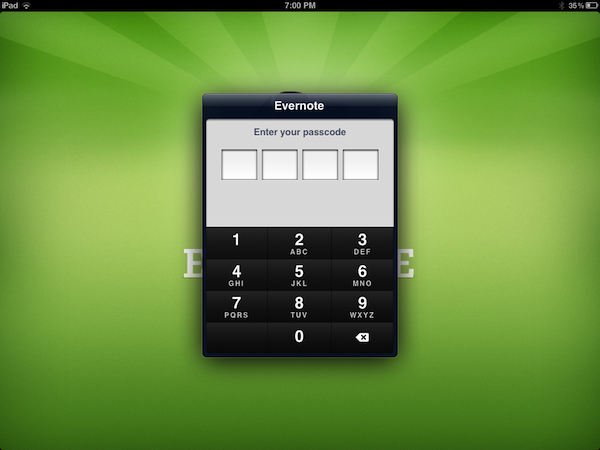 I’m a big fan of Evernote, and it’s no secret this is the update I’ve been looking forward to since the developers posted a note on the company’s official forums. Evernote 4.1 dramatically improves the look & feel of the app on the iPad, and the addition of rich text style is more than welcome, finally turning Evernote into a proper alternative to the plethora of text editors for iOS. Evernote’s biggest advantage over standalone text editors or image capturing tools is that it’s got a full ecosystem living behind it, thanks to the acquisitions the company has made, and the fervid community of developers building apps that leverage Evernote’s API to bring always-connected note creation and “memory management” to other platforms and devices.

Evernote 4.1 is a step in the right direction, and you can download it here.