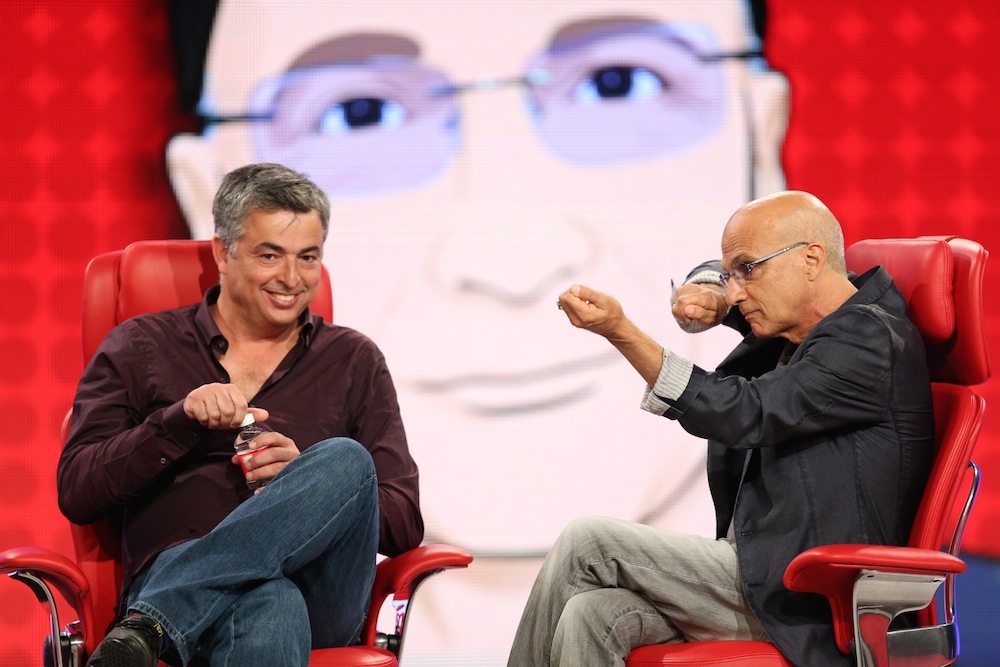 Following the news that Apple was acquiring Beats yesterday, Eddy Cue from Apple and Jimmy Iovine from Beats spoke to Walt Mossberg and Kara Swisher at the inaugural Code Conference. We’ve run through the liveblogs from Re/code and The Verge and highlighted some interesting moments of the discussion below. If you’re interested, I’d recommend reading the full liveblogs yourself and keep an eye out for the full video of the interview (which we’ll link to once posted by the Re/code team).

When asked why Apple did the deal with Beats, Eddy Cue points to the talent of the Beats team (in particular Iovine being the “most talented person…in the business” and the “great” Dre and “great” team), the “awesome” headphones and the recent Beats music service (“subscription music done right”). Expanding upon those reasons, after Walt asked why they didn’t just build headphones or a subscription music service themselves, Cue suggests that Beats will give them a headstart:

We don’t do everything. We try to do a few things. We think Beats’ talent can accelerate us. It was a no-brainer. This isn’t something that just happened overnight. Jimmy and I have talked about working together for a decade.

Jimmy Iovine loves curation. It was pretty clear when he was talking about the current state of music industry (apparantly it is a “ghetto” and they wanted to move to a better neighbourhood, a.k.a Apple):

We think that streaming services need curation. The album is going away. We all know that. The sequencing of an album used to be important. You need an hour’s worth of music. Some of the other services are just based on algorithms. That doesn’t work. Kids listen to programmed radio, and it doesn’t work. We wanted to fix that.

But then he came back to theme when the conversation switched to Gene Munster’s favourite topic, the state of TV:

Iovine: I’ve got an enormous job with music. I’m not going anywhere near TV. But, that said, my bigger problem is with movies. I wanted to watch a movie the other day with my girlfriend. Too hard to pick a movie. We need curation.

When Walt compared iCloud to Dropbox and Google Drive, where users can see where their files are, it prompted some discussion from Cue. He talked about how they don’t want iCloud to have a face:

We’re trying to make services that seamlessly connect with hardware and services. People are using iCloud multiple times a day, and they don’t need a face on it.

Apparently, Apple isn’t against other platforms

Walt noted how Apple has a lot of services (such as iPhoto and iMessage) that are not cross-platform and asked if they ever might exist on other (non-Mac, non-iOS) platforms. Cue responded by saying that Apple “isn’t against other platforms” and that Beats is currently on other platforms including Android and they want to keep it that way. But then he tempered it by saying:

Some of these things, like iMessage, are really integrated deeply into the hardware. Those types of opportunities are more difficult to do with other hardware, but we’ll keep providing some services to other platforms.

This little snippet from the Re/code liveblog is brilliant.

Kara brought up the point that Hollywood people don’t seem to mesh very well with those from Silicon Valley and vice versa. Iovine agreed and described Silicon Valley to be “overconfident”, whilst the business guys in Hollywood are “desperately insecure”. Iovine himself will not be permanently moving to Silicon Valley.

Last, I present the following snippet without comment. Enjoy.

“Later this year, we’ve got the best product pipeline that I’ve seen in my 25 years at Apple.”
Iovine: “I get to see it tomorrow! When I walk around with these guys, they put tarps on everything.”

Walt: Who approached who about this deal?
Iovine: “How does somebody date for 10 years and then get married? All of a sudden it just happens.”
Kara: Tell me.
Iovine: “I’m at Apple now. I can’t say anything.”