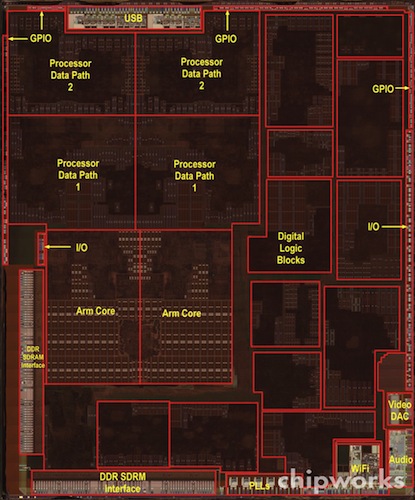 Following the various teardowns of the iPad 2 we saw last week, Chipworks decided to take a closer look at the Apple A5, the dual-core processor that powers the iPad 2 and contributes to its impressive gain in speed and performance. Whilst Chipworks’ teardown isn’t something the average Apple geek would be able to fully appreciate (there’s some highly technical stuff in there, like microscopes and layers of aluminum being closely inspected), there are some interesting points worth mentioning.

By looking at the internal structure of the A5, Chipworks concludes it was manufactured by Samsung in spite of the rumors suggesting Apple would go with TSMC due to the competition arisen with Samsung in the cellphone and tablet market.

At  this scale even electron microscopes start to run out of steam, so not the clearest of images in either case, but good enough to see the similar shape of the transistor gates and the dielectric layers.  So at least this sample of the A5 is fabbed by Samsung, just as all Apple’s processor chips have been for the last while.

Other notes by Chipworks include the ARM cores with ~4.5 Mb of cache memory each, and the A5 being roughly twice the size of the old Apple A4 chip from the iPad 1. Just in case you had any doubts about the performances guaranteed by the A5, this teardown is here to confirm that Apple went with Samsung once again to produce a chip that’s twice the size, dual-core and optimized for a tablet’s battery life. [via TUAW]