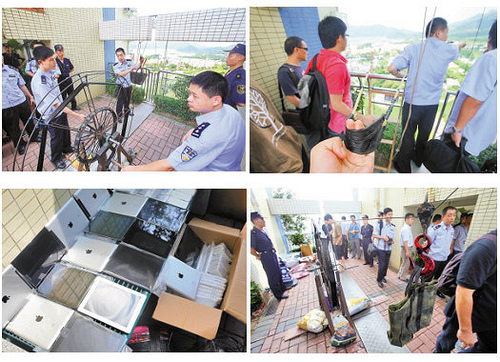 Yes, you did read that headline correctly. Smugglers moving Apple products from Hong Kong to mainland China were caught doing so via a clever pulley system that had iPhones and iPads being hoisted over the border with a large tote bag, hook, and a crossbow that was used to initially get the 300 meter cable over the Sha Tau Kok river. In an operation consisting of six smugglers, iPads and iPhones could be transferred across the river in about 2 minutes under the cover of darkness, where products were lifted up to the 21st floor of a residential block in Shenzhen. After a surveillance operation, Chinese customs moved in arrested the six smugglers, recovering 50 iPhones and 50 iPad 2s in the process worth 300,000 yuan (around $47,000).

Smugglers attempting to smuggle electronics into China hope to rake in profits — devices sold in China are much more expensive than devices sold in Hong Kong. Smugglers can purchase electronics in Hong Kong (whom have some of the cheapest prices in the world) and resell devices in the mainland, where they can profit off of the higher prices. Smugglers simply can’t move electronics across the border since as China requires a 20% property tax for all electronic devices brought into the country. Thus, we end up with a situation like this — smugglers get creative in an attempt to make a quick buck selling devices back home.

As for the high-wire act, there’s a video report to go with it, showing off the equipment the smugglers used to move items between the border which we’ve posted after the break.