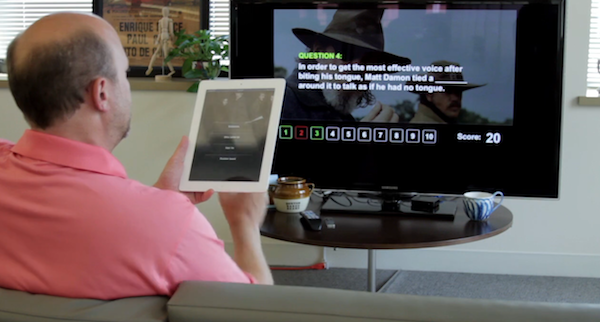 Brightcove today unveiled their ‘App Cloud Dual-Screen Solution for Apple TV’ which is effectively a development kit that allows developers and media publishers to easily create “dual-screen” apps that utilise AirPlay. It enables an Apple TV to effectively become a second screen in which different content can be showed, but synchronised to what is shown on the iPad or iPhone. As highlighted in the demonstration video below, this tool could be used to create interactive quiz games or perhaps an app that plays a video on a TV and display additional information on the iPad or iPhone.

This kind of tablet-TV interaction is something that is relatively new, but at the same time it’s an area seeing a lot of innovation - I’m fascinated to see how far we will be in a years time, let alone two. Just recently Microsoft also unveiled their ‘Smart Glass’ technology which has similar functionality to that shown in Brightcove’s demo but also has huge possibilities for Xbox games.

The App Cloud Dual-Screen Solution for Apple TV opens the door to a new kind of content experience for the connected consumer that blends the rich contextual information that fans crave with HD television viewing.

If you’re interested in this topic, be sure to check out The Verge which had a chat to Brightcove CEO Jeremy Allaire and a few others about how the “battle for the living room” is heating up.