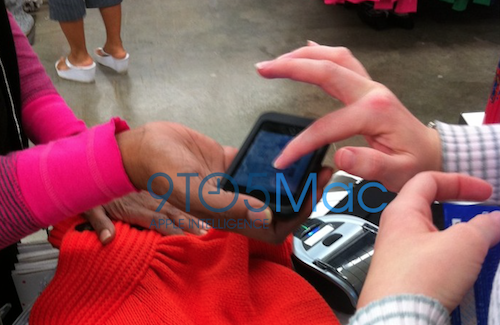 According to 9to5mac, Apple and Gap Inc’s Old Navy stores have started piloting an iPod-based PoS (Point of Sale) system which allows customers to sign receipts with their fingers and print receipts wirelessly to printers in Old Navy’s store.

Apparently, some employees are also wearing mini-printers attached to their belts. This is just so cool. 9to5mac also reports Apple and Gap have been in a close relationship since Gap’s former CEO Millard Drexler has been sitting on Apple’s Board since 1999 and Steve Jobs sat on Gap’s one from 1999 to 2002.

Last month Apple’s first customer, Gap Inc’s Old Navy subsidiary began piloting them.  We’re told there is one per store and they are kept in a safe when not in use.

To be clear, we’ve been told this is an Apple PoS (not one of many third party systems that use an iPod to make transactions) system but rebranded ‘ZipCheck’ for third parties.

We’re pretty sure the new PoS system will come in handy this holiday season as it’s a quick way to confirm a transaction and will surely help in cutting lines and waiting times. It is unknown yet whether this technology will soon make its way to other stores and retail chains, but we think it should. It looks far too interesting to be available only in certain stores.