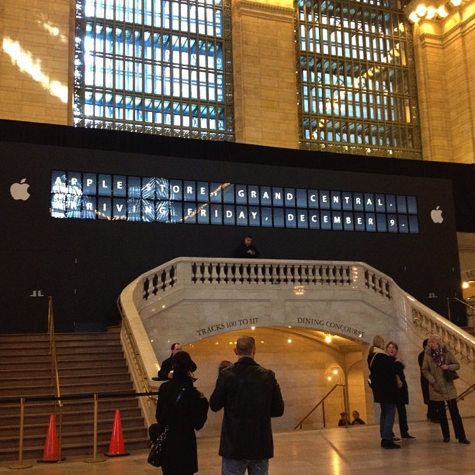 “Apple Store, Grand Central. Arriving Friday, December 9”. Marco Arment tweeted a photograph of the updated displays on the cloaked storefront this morning as Apple prepares to unveil their new retail store next Friday.

Apple’s Grand Central Retail Store is currently under investigation by State Comptroller Thomas DiNapoli as to whether the Metropolitan Transportation Authority gave them an overly favorable lease to set up shop. Where Apple’s only paying $60 per square foot (for a 23,000 square foot space), other retailers in the terminal are paying $200. The favorable deal also included that Apple does not have to share revenues with the MTA, as Apple’s business presence would drive more customers into nearby tenants.

However, the MTA claims that Apple has been paying in other ways, such as with upgrades the space’s infrastructure, including the addition of elevators to assist shoppers. MTA spokesperson Aaron Donovan notes Apple made an upfront payment of $5 million to the previous occupant, which means they are effectively paying $180 per square foot.

“Consistent with the Comptroller’s recommendations, the MTA moved proactively to maximize revenue and quadrupled the rent we receive for this unique space,” MTA spokesman Aaron Donovan said of the Apple deal in an e-mailed response yesterday.

Apple’s rent is initially $800,000 for the ten year lease. In comparison to the 5th Avenue retail store, the New York Post writes:

While Apple is said to have grabbed the basement space for its “Cube” in front of the GM Building for less than $5 million a year, sources estimate the 10,000-square-foot location is generating annual volume of more than $400 million — and at least $15 million in percentage proceeds for the landlord.

The Grand Central retail store is expected to rake in over $100 million a year in sales.