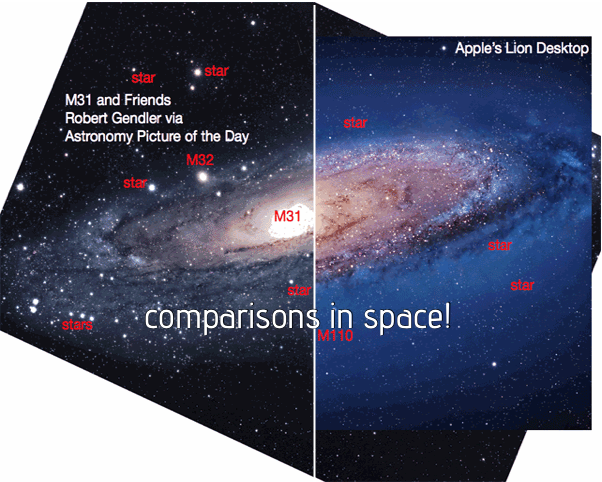 Boing Boing’s Maggie Koerth-Baker made a great comparison today between the actual Andromeda Galaxy (which is 2.5 million years away from Earth), and the Andromeda Galaxy representation that ships as the default wallpaper in OS X Lion. Thanks to a reader of the site (David Kaplan, assistant professor of physics at the University of Milwaukee), a GIF shows a comparison between what’s actually in the sky and what Apple shows you — Apple’s representation has of course been photoshopped. With the removal of stars and galaxies, the professor points out that one of Andromeda’s big satellites (M110 for those keeping track) is completely missing.

Apple has once again altered the Universe according to their whim. They moved/removed many stars, and got rid of a whole galaxy. This is M110, which is one of M31’s [Andromeda’s] satellites. The other big satellite, M32, is still there.

Okay, it is purposely done for the sake of art and keeping things pretty, but what I like about Boing Boing’s piece is that it actually gets people to see and learn about one of our galaxies. And normally I wouldn’t plug apps in a post like this, but this would be a good time to check out the Andromeda Galaxy via Qwiki (it’s an audio link). Cool right? See the side by side by comparison at Boing Boing.