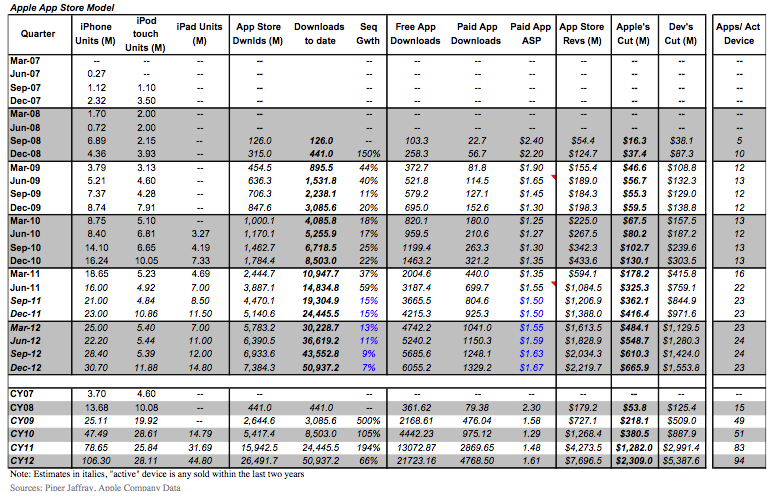 The average iOS device owner will download 83 apps in 2011 vs. 51 in 2010, a 61% increase year over year. “Smartphone users are showing an increasing appetite to use apps to add features to their phones,” Munster writes,” and iOS has the leading app ecosystem.”

While the title is somewhat misleading (are we comparing iOS against Android again?), Piper Jaffray’s Gene Munster looks at the at the trend of app sales and ‘average selling price’ per app since September 2008, charting a nice graph that shows the App Store’s steady increase in downloads for free and paid applications. So far in 2011, the average selling price per app is up 14% year-over-year, versus a decrease of 18% in 2010. “After the initial race to the bottom in App Store pricing, we are seeing users pay up to add features and games to their iOS devices”, Munster writes.

I think we can attribute the recent uptick to in-app subscriptions. Magazines and newspaper subscriptions sold in the App Store can cost anywhere from $20 to $60 a year, and Apple has been aggressive in advertising digital publications via ‘featured’ and ‘what’s hot’ banners. Too, there’s been a recent trend with games like Tiny Tower that can rack up a lot of money by selling in-game currency which vastly improves the experience once players are hooked. The in-app purchase and subscription models are working out very well for developers that implement them.

82% of the apps in Apple’s store are free. The 18% that users have to pay for have an ASP of $1.44. According to Munster, the increase in ASP is driven by the more-expensive iPad apps that represent a growing percentage of app downloads.

Again, a lot of these new iPad apps are digital magazines. While we have seen some great apps hit the App Store for $19.99 (OmniOutliner for iPad) and $9.99 (The Hit List for iPhone), unfortunately I think developers that are willing to price their apps high are still few and far between. I must admit, however, that I have seen more $2.99 and $3.99 dollar apps this year than the $.99 and $1.99 I’ve seen in the past. Then again, perhaps my inbox is just being pitched with more expensive apps than usual. Regardless, selling apps at higher price (more representative of an app’s value) is a good thing for developers, and it’s especially important on the iPad where quality software dictates how well it can replace a laptop. With iOS 5 around the corner, I wonder if users would be willing to spend more if the iPad was their only computer?

The App Store still has some kinks to work out, but it’s currently looking pretty healthy. Consumers are buying lots of apps (and in-app purchases), while developers are raking in just a little more money than before if we’re to believe Munster’s findings.