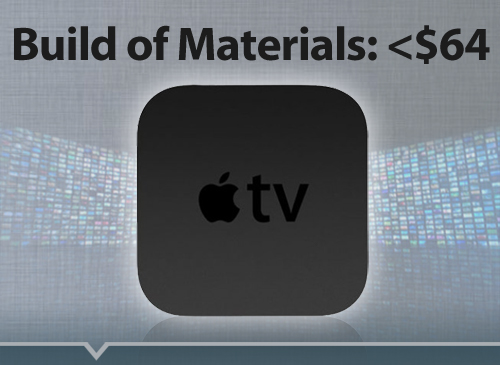 The most expensive part is Apple’s own A4 processor, priced at $16.55. It’s the same chip that’s used in the iPad, iPhone 4 and iPod Touch.

Apple TV is now 80 percent smaller than the original, reflecting component alterations, says Andrew Rassweiler, an iSuppli analyst who conducted a so-called ‘teardown analysis’ of the Apple TV device. The materials cost of the new model leaves room for Apple to earn a profit, Rassweiler says.

As soon as we saw the first A4 chip in the iPad, it was pretty clear to us that Apple’s plan was to use it across several devices,” Rassweiler says. “It makes sense to control costs across the supply chain.

The next expensive component is the 8GB flash drive, at $14. Apple used a chip from Broadcom in a combined Wi-Fi and Bluetooth module that costs $7.65, iSuppli says. texas Instruments charged 93¢ for their microcontroller chip, also said by iSuppli.