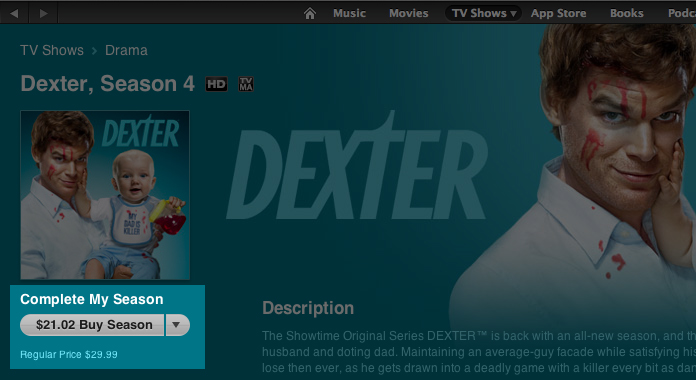 Over the past 24 hours Apple has introduced “Complete My Season” for iTunes TV shows and has improved its existing “Complete My Album” feature. The “Complete My Season” feature enables users who have purchased some episodes from a TV season to purchase the rest of the season using the “Season Pass” but at a reduced price that takes into account the already purchased episodes. It allows users to easily purchase all the episodes of a TV season with effectively one click and not having to worry about purchasing one of the episodes again, when you already own it.

However it appears as though the feature may be limited to those in the US iTunes Store - I checked on my TV purchases in the Australian Store and was unable to utilise this feature, similarly, it appears not to be enabled in the UK. If you live outside the US and do have access to this new iTunes feature, please let us know in the comments below.

The similar feature for music albums, “Complete My Album” (which has been available for a few years) also received a nice update today. Previously, this feature could only be used in the first 180 days since purchasing a song from an album. Today MacRumors notes that Apple has revised the support document about the feature, noting that there is no longer any reference to the 180 day limit (see below for current statement).

How long do I have to take advantage of Complete My Album?

When you buy individual songs from any qualifying album, you can complete the album at any time, as long as the album is available for sale on the iTunes Store.