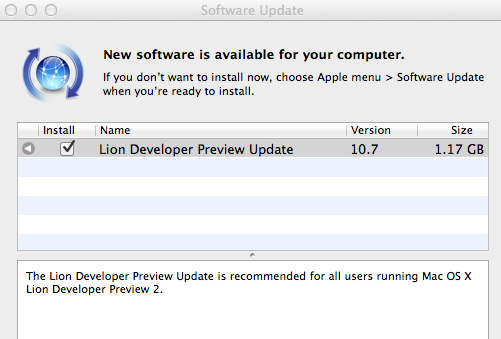 Alongside Xcode 4.1 Developer Preview 4, Apple also released another update for OS X Lion Developer Preview 2. The update weighs at around 1.17 GB and it’s available now in the Software Update control panel. It is recommended for all users running Lion DP 2.

Two weeks ago, Apple did the same and released a new build of Xcode 4.1 and the first update to Lion DP 2. The original Lion Developer Preview 2 was released in late March, and we’re expecting another major update before the WWDC, with a GM seed being seeded to developers in June. If you spot anything new in this update, leave a comment below. We’ll update this post with more notes as further details come in.

Update #2: We’re hearing the new Lion update has a snappier Finder, a better UI for deleting apps from the Launchpad, and lots of design tweaks to changes introduced in the previous DP builds.