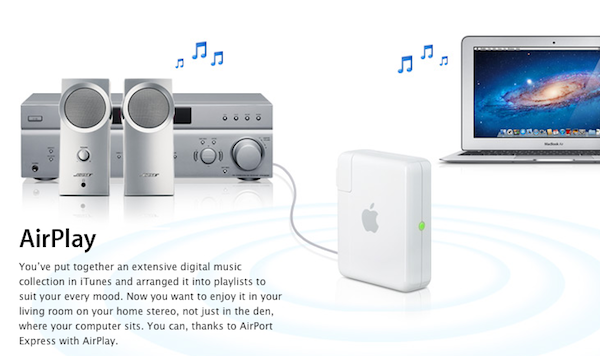 According to AppleInsider, Apple is readying the release of a third-generation AirPort Express station, the second version of the device to use the 802.11n wireless standard. The website reports “people familiar with the matter” claim Apple is working on an update to AirPort Utility, version 5.6, which contains strings mentioning “AirPort Express 802.11n (2nd Generation) base station” in the developer notes. The current version of AirPort Utility, 5.5.3, was last updated in June amidst rumors of iCloud functionality deeply tied with a caching system for software updates. Such rumors didn’t materialize at WWDC, and no further mentions of caching systems for iOS and OS X appeared in the developer betas released this summer.

The AirPort Express station (model MB321LL/A) was updated in 2008, adding initial support for 802.11n; the first version of the base station came out in 2004. AppleInsider reports third-party resellers claim the existing MB321LL/A model has been discontinued, whilst Amazon expects new stock to become available in 2 to 5 weeks.

One of the AirPort Express’ most promoted functionalities is support for AirPlay (nèe  AirTunes), which allows users to beam audio to the station using iTunes or compatible iOS apps, provided a set of speakers is connected to the AirPort Express through the built-in mini-jack output. Similarly, the AirPort Express enables wireless printing thanks to a USB port. Other features include Internet Sharing, extreme portability, and easy setup with AirPort Utility (which can automatically configure AirPort stations on a network).