Apple has published their Q2 2013 financial results for the quarter that ended on March 31st, 2013. The company posted revenue of $43.6 billion. The company sold 19.5 million iPads, 37.4 million iPhones, and  “just under” 4 million Macs, earning a quarterly net profit of $9.5 billion.

We are pleased to report record March quarter revenue thanks to continued strong performance of iPhone and iPad,” said Tim Cook, Apple’s CEO. “Our teams are hard at work on some amazing new hardware, software and services, and we are very excited about the products in our pipeline.

Apple added $12.5 billion in cash flow “from operations during the quarter”, ending the quarter with a cash balance of $145 billion.

Today, Apple has also announced they have doubled the capital return program:

The Company expects to utilize a total of $100 billion of cash under the expanded program by the end of calendar 2015. This represents a $55 billion increase to the program announced last year and translates to an average rate of $30 billion per year from the time of the first dividend payment in August 2012 through December 2015.

The iPod line would be refreshed later in the year, with Apple posting 12.7 million iPods sold for the first quarter in 2013. New iPad models and the iPhone 5 also greatly contributed to a successful first quarter in the new year, with Apple posting revenue of $54.5 billion ($13.81 per diluted share) for Q1 2013. Apple sold 22.9 million iPads, 47.8 million iPhones, and 4.1 million Macs, with iPad and iPhone sales breaking new quarterly records.

Apple has remained quiet for their second quarter, although a 128 GB model iPad became available in February while MacBook Pros with Retina displays received updated processors. The 13-inch Retina MacBook Pro with Retina display and 13-inch MacBook Air were also dropped in price to $1499 and $1399 respectively. Early in January, Apple also introduced the iPad mini with cellular and fourth generation iPad models to China, while Japan received the iBookstore in March.

Apple will provide a live audio feed of its Q2 2013 conference call at 2:00 PM PT, and we’ll update this story with the conference highlights.

“Decline in AAPL stock price over last quarters has been very frustrating, but Apple remains very strong, and Apple will continue to do what it does best”

“Our teams are working on new hardware, software, and services that we can’t wait to introduce this Fall and throughout 2014”

iPad very strong year-over-year in every operating segment, especially in China and Japan where we doubled sales.

iPod touch makes over half of all iPods sold.

iPod share of US market is over 70% in March quarter according to NPD.

Apple retail stores - $5.2 billion, compared to $4.4 billion year-over-year, an increase of 19% fueled by growth of iPhone and iPad.

We plan to open 30 new stores in fiscal year 2013 and to complete 20 store remodels.

101 million customers compared to 85 million, 17.5 thousand per store per week.

Q: China - growth did slow to single digits. Is Apple hitting a wall? Stickiness lacking because of lack of a store?

Tim: We actually had best quarter ever in Greater China. Revenue at $8.8 billion, that includes retail stores that are in that region. That’s up 11% year-over-year, that includes retail stores in that region, which are same as Apple is growing. Highlights in China, iPad grew 138% year-over-year, and we set new records for sell thru for iPhone and iPad during quarter. There were some year-over-year timing differences with regard to inventory. We increased iPhone inventory to meet demand. As I said in year-over-year quarter, we launched iPhone 4S with Unicom in January and Telecom in March, and this year we launched iPhone 5 in December. Going forward, we still see significant opportunity in China. china has an unusually large potential of first time smartphone buyers. we’ve seen an interest in iPhone 4 and recently made it more affordable to make it more attractive to first time buyers. we hope that it will help iPhone sales in future.

Q: Tim you mentioned several factors that were compressing margins - what do you think of competitive landscape? Get stock back?

Tim: I think that names of competitors have changed. RIM was strongest player because of enterprise, and of course today, our top competitor is Samsung married to Google on operating system side. They’re obviously tough, but we feel we have the best products by far, and we are continuing to invest in innovative products and feel really confident about our product pipeline in both hardware, software, and also services. We have the best ecosystem by far. And we are going to keep augmenting it and making it better and better, and that shows up in loyalty ratings and customer satisfaction.

Q: Tim you alluded to Fall announcements. Is that indicating there may not be substantial new products until literally this Fall?

Tim: I don’t want to be more specific, I’m just saying we’ve got some really great stuff coming in the Fall and across 2014.

“We believe people all over the world want great products.”

Tim Cook: My view continues to be that iPhone 5 has absolute best display in the industry. And we always strive to create the very best displays for our customers. Some customers value large screen size, others value also other factors like resolution, color, white balance, brightness, reflectivity, compatibility with apps, others… Our competitors have made significant trade-offs in these areas to ship a larger displays. We would not ship a larger display iPhones while these trade-offs exist.

Gene: Is that… in the next year?

Tim: I didn’t announce a specific time frame. But…

Gene: Peter, you mentioned new services you can build and improve upon existing services. Is that beyond natural evolution… any other key assets that you can leverage?

Peter: Nothing specific Gene, but we are very fortunate to have the largest and broadest ecosystem in the world. Hundreds of millions of users. Just crossed 16 billion run rate in iTunes Store. And we’ve just achieved 4 billion in services. But we see opportunity that we are going to invest in tremendously to grow in those area.

Tim: Because we are not fragmented like our competition, we can update an OS with a major release and a substantial number of customers will update to the latest version. Because usage for iOS is so much higher, when we integrate things well, people use them a lot more. Those concepts by itself are huge advantages from a customer experience point of view, and from the metrics you’re thinking of.

Tim: We were down 2%, I think the reason is that market for PCs is incredibly weak. IDC said it’s down 14% year-over-year. At the same time we sold almost 20 million iPads, and it’s certainly true that some iPads cannibalize some Macs. I don’t think it was a huge number, but I do think it is some, and I do think probably larger thing for PC side is people are extending upgrade cycles.

That said, I don’t think this market is a dead market or a bad market, I think it has a lot of life. We’re going to continue to innovate, we believe if anything the huge growth of tablets may benefit the Mac because it pushes people to think about product they’re buying in a different manner and so, we’re going to continue making personal computers. Our strategy is not changing, and we feel good about it. We delivered incredible innovation last year and we have more great stuff planned.

Q: What you’ve heard about displacement in enterprise? Discussions you have with enterprise in regards to iPads?

Tim: We’re doing really well. iOS accounted for 77% of all activations by corporate customers. That would not include BlackBerry, but it would include all the other guys. We seem to be doing really well, and honestly I don’t see the recent announcements changing that at all. I see more and more people developing more and more apps for their business to be used on iOS and iPad. To quote you some numbers, iPad now is being used in 95% of Fortune 500, and more impressive, Global 500 is 89%.

Below, a series of graphs showing Apple’s Q2. Click the images for larger size. 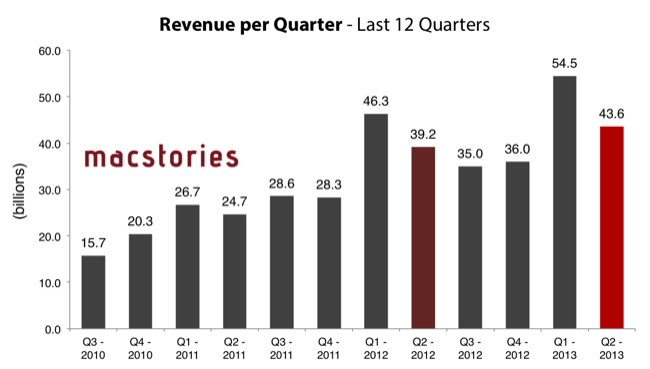 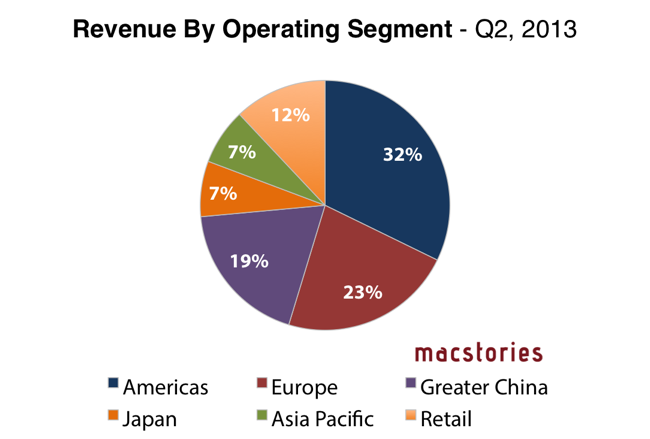 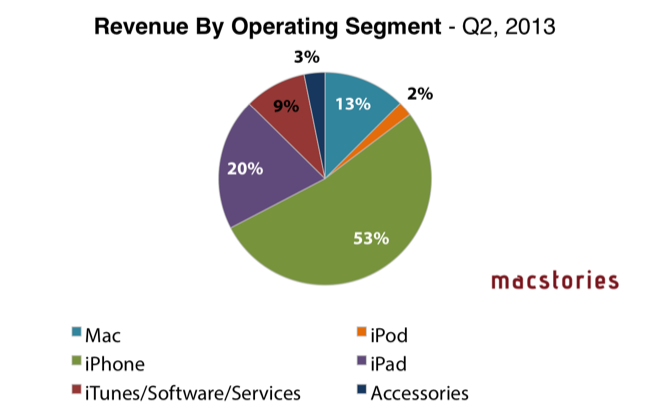 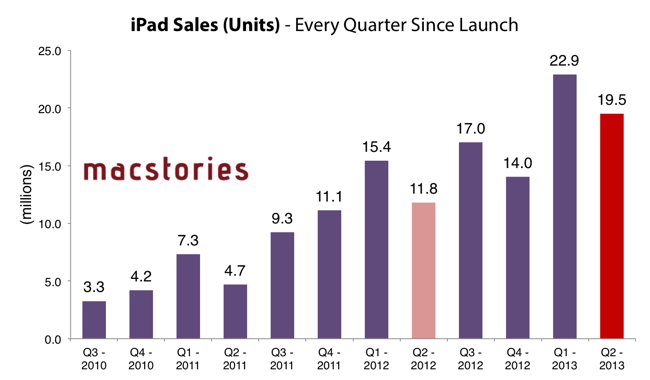 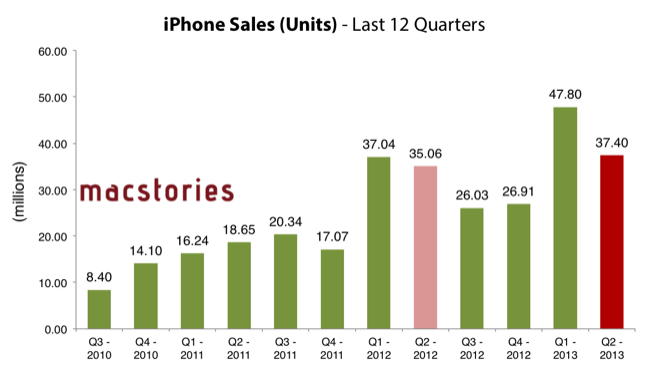 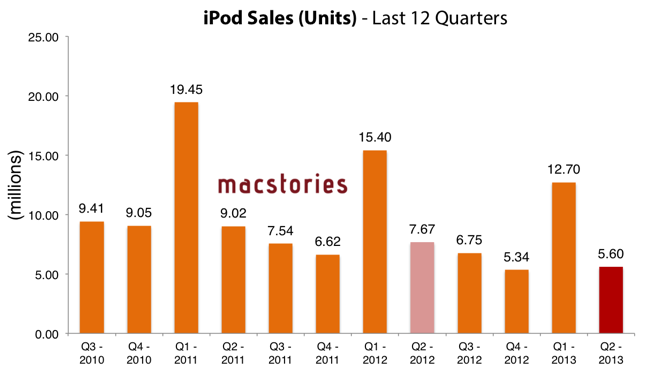 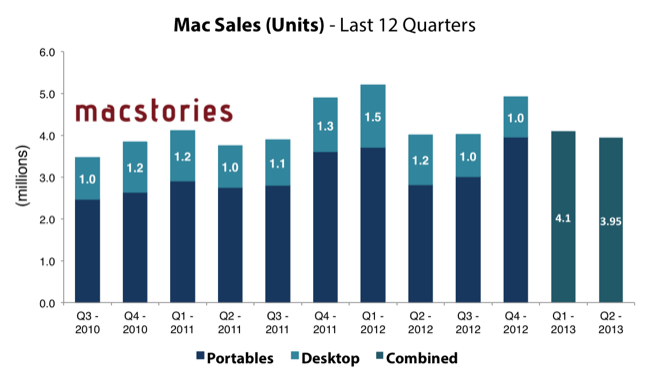