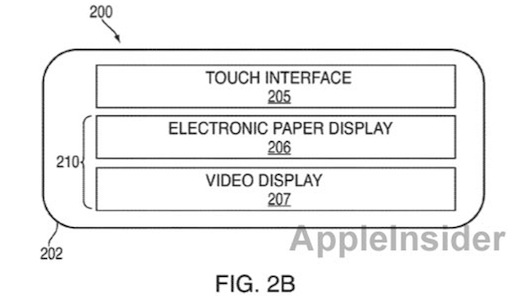 A new patent revealed today shows that Apple has given consideration into a hybrid display that could dynamically switch and even simultaneously use e-ink and a traditional LCD system for displaying content for a device such as an iPad. The patent filed in October of 2009 and entitled “Systems and Methods for Switching Between an Electronic Paper Display and a Video Display” has a clear purpose in that it could be used for easier reading of text, particularly in an application such as iBooks.

The system described in the Apple patent would work by placing a translucent e-ink display above the traditional LCD panel (and below the touch panel), and depending on what content is supposed to be displayed, the switching on and off of the panel would be done by the system rather than the user. E-ink displays have some clear benefits in that they do not require a backlight, are less likely to induce eye strains than the bright screens of an LCD display and can be read in direct sunlight, as this Amazon ad last year highlighted to great effect.

An LCD obviously reigns supreme with high-resolution, dynamic and coloured content whilst e-ink is best for static text in black and white. The Apple patent aims to solve such an issue by allowing for separate display regions that can be independently activated when necessary. It was in fact previously rumored that the iPad 2 would have greater anti-reflective and anti-smudge treatments as a way to improve reading on the device but such a system described in this patent with a hybrid display of e-ink and LCD technology would be a far superior answer to the problems of reading in direct sunlight.