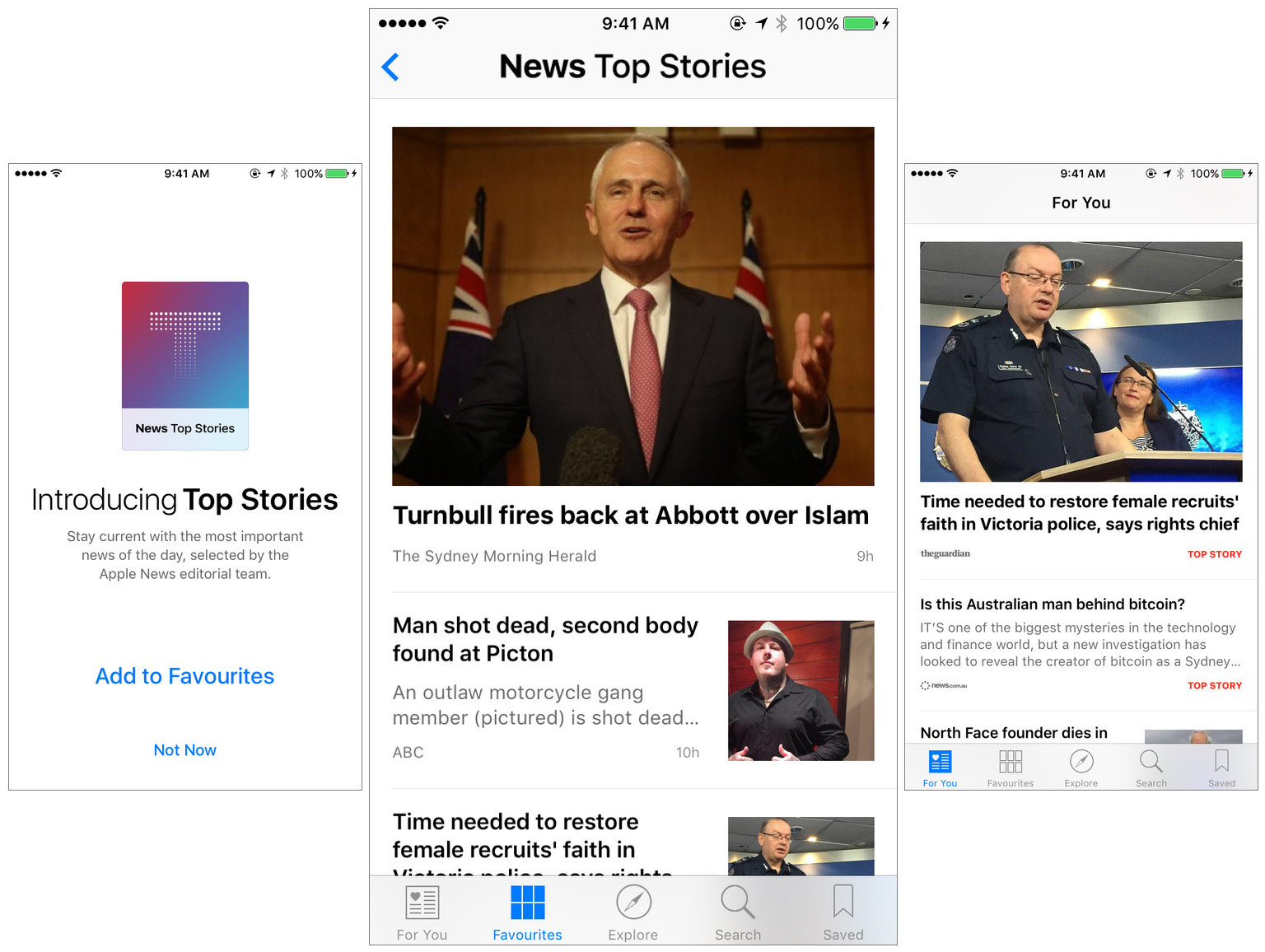 (L-R) The Apple News launch screen after you update to iOS 9.2, the Top Stories channel in my Favorites section, the For You section which features Top Stories (note the red tag on the right).

Apple’s update for its iOS app, which begins rolling out today, has two components. Only one of them will be visible to regular users: Apple’s editors will curate a list of “top stories” they’ll display for all of the apps’ users, at least a couple of times a day.

That’s a change in philosophy from this fall’s launch, when the app was supposed to highlight stories based on each of its users’ tastes and reading behaviors.

That’s still going to happen throughout the day, but in the morning and in the afternoon, Apple will assemble a handful of stories it thinks all of its users would want to see. You know — like a newspaper.

After you install iOS 9.2 and open Apple News for the first time you’ll be given the open of adding ‘Top Stories’ to your Favorites. If you do add it to your favorites, the ‘For You’ section of Apple News will prominently feature articles that Apple editors have deemed to be a top news story for the day. You can also go directly to the Top Stories channel in your Favorites to view all of the top stories in one place.

In my launch review of Apple News I was critical of the overall Apple News experience, which I found to be disappointing. One of my chief complaints was that you couldn’t rely on Apple News to give you all of the day’s big news stories – the lack of human picks and poor automated curation was readily apparent:

Arguably the most frustrating part of For You is the fact you never get a good sense of what the big stories of the day are. To me, this is vital to any news app, website, or service – I don’t just want to read interesting articles that I might like, but I want to know the most important of those stories.

I’ve only spent 20 minutes with iOS 9.2 and the updated Apple News, but early signs are positive. The For You section began with stories which were prominently marked as a “Top Story” and indeed they were (mostly) appropriate. I was pleasantly surprised to see they even have Australian editors, curating the top Australian news stories. So I’m going to give Apple News a second chance and see if it fares any better with the addition of human curated top news stories, and I’ll report back to you all next week.