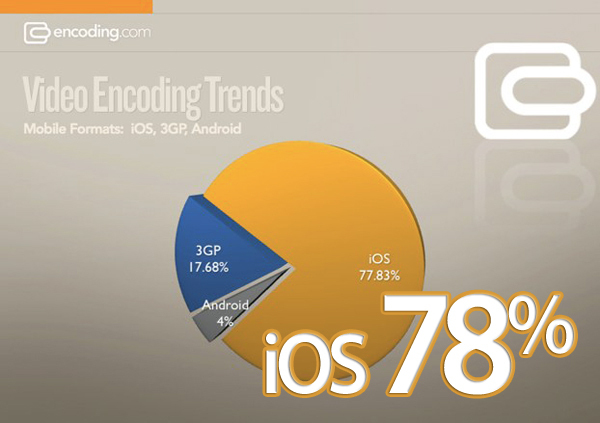 More than ever people are watching videos on mobile devices these days. So, when a website encodes their videos, they must decide which devices to support and encode their video to play on different smart phones and tablets. According to Encoding.com is reporting that, nearly 78 percent of its customers (MTV to PBS) encode mobile video to play on Apple’s iDevices, and only 4 percent specifically for Android devices. 18 percent encode for 3GP format, which is used by feature phones.

This data is based on which preset options Encoding’s customers choose. It doesn’t mean that only 4 percent of videos will play on Android devices (which after all support Flash, MPEG-4, and 3GP), but that only 4 percent of Encoding’s customers bother to select the Android preset, which provides the optimal viewing experience on those devices. Whereas choosing the Apple presets is pretty much the default right now, and as noted earlier, iOS was embraced rather quickly. Encoding’s 1,400 customers are fairly representative of video producers across the Web, spanning media, advertising, retailers, and developers.

Jeff Malkin, the CEO of Encoding.com, believes that Android numbers will go up as more people buy Android devices; iOS is dominating right now, but Android is rising. Malkin says that video creators want to see major movement before targeting a specific set of devices.

Malkin sees “a mass migration away from WMV occurring.” Windows Media (WMV) is all the way down to 1.2 percent, while the H.264 format continues to excel.