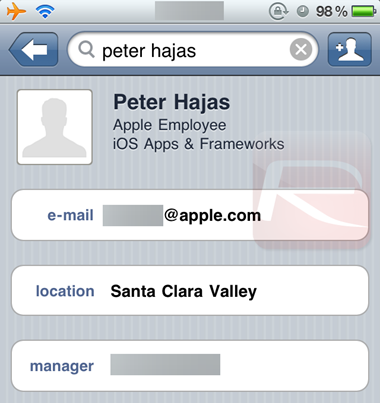 Last week, fans of the popular jailbreak tweak MobileNotifier were left slightly disappointed to hear that the tweak’s creator, Peter Hajas, was taking a break from his jailbreak development work. However, in the blog post announcing the break and in follow-up tweets he left several suggestions that he had started working for Apple, and now there is evidence in the internal Apple Directory System that he is indeed an employee (see above).

That first clue in the blog post was when he signed off with “Until then, stay hungry and stay foolish”. Some clever people recalled that Steve Jobs had uttered the same words of “stay hungry and stay foolish” in his Stanford Commencement Speech back in 2005. However in a tweet that same day, he seemed to distance himself from that suggestion, commenting that the Apple rumor community has “a vivid imagination”. But further digging into tweets by Hajas led some to find a tweet from May 9th in which Hajas, in reply to someone said that “I’m off to work in CA at a “fruit” company” – that tweet has since been deleted.

Today however, RedmondPie seems to have all but confirmed Hajas’ employment at Apple with a screenshot of the Apple Directory System app, obtained from a source working at Apple. The screenshot shows Hajas working as an “iOS & Frameworks” employee. If this is the case, it wouldn’t be the first time that Apple has swooped and hired developers from the jailbreak community, back in 2007 it was suggested that Apple hired several people to work on the application distribution model used by the App Store.

An obvious reason for the hire that many are suggesting is that Apple wants Hajas’ skills for a new notification system in iOS. His MobileNotifier jailbreak tweak has been popular amongst jailbreak users for how it overhauls the inbuilt iOS notification system into something much more helpful and powerful, whilst being less intrusive.