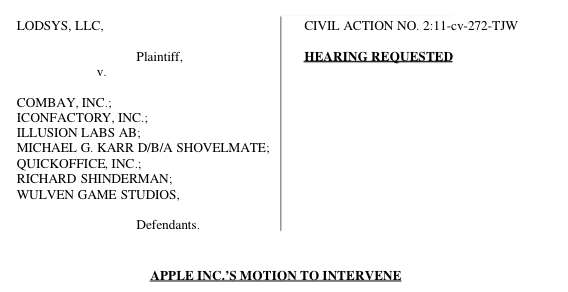 Whilst Lodsys can oppose Apple’s attempt to intervene in the case, FOSS Patents says that “Apple is fairly likely to be admitted as an intervenor”. In Apple’s proposed defence, it is argued that Apple’s existing license agreement with Lodsys covers the third party developers being sued – an argument Apple made with Lodsys in its letter to them. Contrary to what some might have presumed would happen, Apple does not claim any other defences such as disputing the validity of the patents – but the third party developers could still do so.

I’m reasonably optimistic that Apple will get to intervene. There appears to be precedent for that. Apple cites three interventions admitted in more or less comparable cases (Intel against Negotiated Data Solutions, Intel against U.S. Ethernet Innovations, and Microsoft against TiVo).

It isn’t clear what Apple’s relationship with the developers is (likely under a non-disclosure agreement) but more than likely is that Apple will help them with financial costs and perhaps even the potential risks. In its motion, Apple states that those developers being sued by Lodsys are “are individuals or small entities with far fewer resources than Apple and […] lack the technical information, ability, and incentive to adequately protect Apple’s rights under its license agreement”.

In its post, FOSS Patents also shares some screenshots of the developers iTunesConnect app management service which asks developers about potential legal issues with their apps. If a developer says “yes” to legal issues, that app will become “unavailable to be restored and/or downloaded as a previous purchase by App Store customers” through the new iCloud service.

If you want a full rundown of Apple’s motion to intervene, FOSS Patents has an excellent run down, along with questions that the motion does not answer. If you feel brave enough you can also read the official motion here.